In: Constitution of India 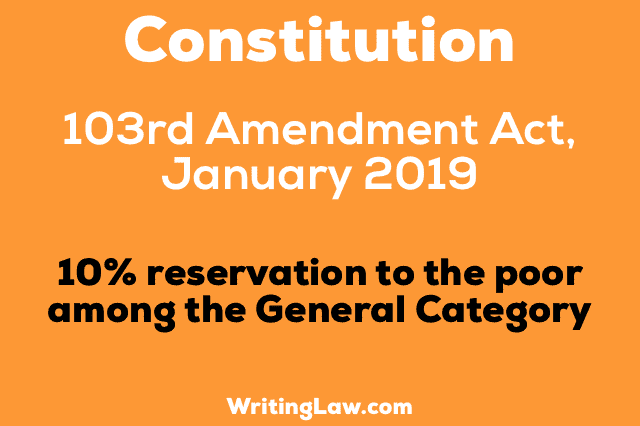 The Constitution of India was amended (revised, altered, changed) for the 103rd time since its creation in 1950. The 103rd amendment gives 10% reservation in government jobs and education to the poor among the general category.

The following Act of Parliament received the assent of the President on the 12th January, 2019, and is hereby published for general information-

An Act further to amend the Constitution of India.
BE it enacted by Parliament in the Sixty-ninth Year of the Republic of India as follows-

(1) This Act may be called the Constitution (One Hundred and Third Amendment) Act, 2019.

(2) It shall come into force on such date as the Central Government may, by notification in the Official Gazette, appoint.

In Article 15 of the Constitution, after clause (5), the following clause shall be inserted, namely-

(a) any special provision for the advancement of any economically weaker sections of citizens other than the classes mentioned in clauses (4) and (5); and

Explanation-
For the purposes of this Article and Article 16, “economically weaker sections” shall be such as may be notified by the State from time to time on the basis of family income and other indicators of economic disadvantage.’

In Article 16 of the Constitution, after clause (5), the following clause shall be inserted, namely-

“(6) Nothing in this Article shall prevent the State from making any provision for the reservation of appointments or posts in favour of any economically weaker sections of citizens other than the classes mentioned in clause (4), in addition to the existing reservation and subject to a maximum of ten per cent of the posts in each category.”.

DR. G. NARAYANA RAJU,
Secretary to the Govt. of India.

Article 15– Prohibition of discrimination on grounds of religion, race, caste, sex or place of birth.
Article 16- Equality of opportunity in matters of public employment.
Article 19- Protection of certain rights regarding freedom of speech, etc.
Article 29- Protection of interests of minorities.
Article 30- Right of minorities to establish and administer educational institutions.

Here is a tweet from BJP on 27th January 2019 related to this amendment. 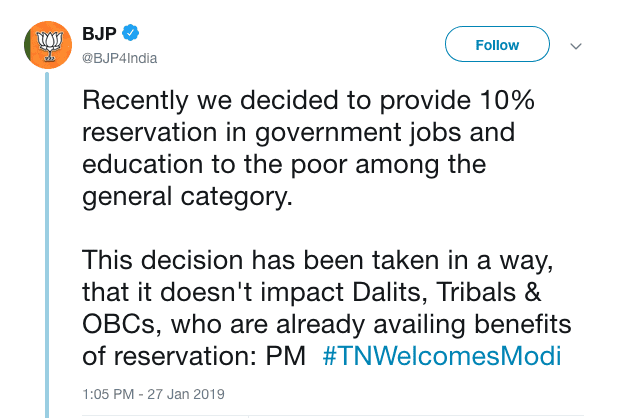 If you are a regular reader, please consider buying the Law PDFs and MCQ Tests. You will love them. You may also support us with any amount you like. Thank You.
2020-06-12