CHAPTER I (3-9) – COMMUNICATION, ACCEPTANCE AND REVOCATION OF PROPOSALS 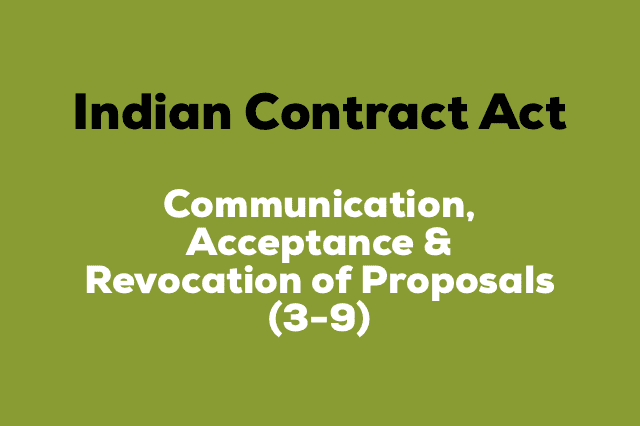 CHAPTER I of Indian Contract Act

OF THE COMMUNICATION, ACCEPTANCE AND REVOCATION OF PROPOSALS

3. Communication, acceptance and revocation of proposals.

The communication of a proposal is complete when it becomes to the knowledge of the person to whom it is made.

Illustrations-
(a) A proposes, by letter, to sell a house to B at a certain price.
The communication of the proposal is complete when B receives the letter.


B revokes his acceptance by telegram.
B’s revocation is complete as against B when the telegram is dispatched, and as against A when it reaches him.

5. Revocation of Proposals and acceptance.

A proposal may be revoked at any time before the communication of its acceptance is complete as against the proposer, but not afterwards.

An acceptance may be revoked at any time before the communication of the acceptance is complete as against the acceptor, but no afterwards.

A proposal is revoked-
(1) by the communication of notice of revocation by the proposer to the other party;
(2) by the lapse of the time prescribed in such proposal for its acceptance, or, if no time is so prescribed, by the lapse of a reasonable time, without communication of the acceptance;
(3) by the failure of the acceptor to fulfil a condition precedent to acceptance; or
(4) by the death or insanity of the proposer, if the fact of the death or insanity comes to the knowledge of the acceptor before acceptance.

7. Acceptance must be absolute.