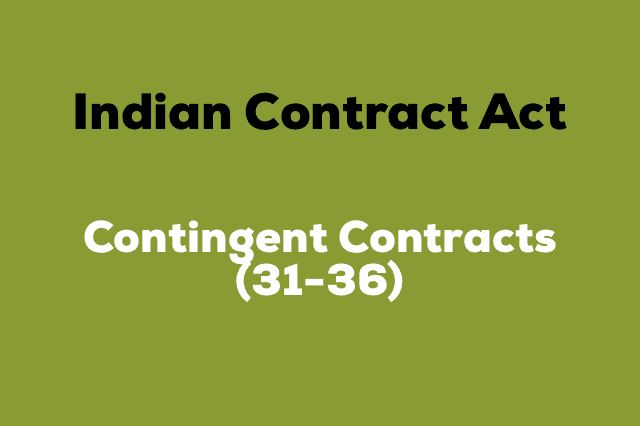 A “contingent contract” is a contract to do or not to do something, if some event, collateral to such contract, does or does not happen.

Illustration-
A contracts to pay to B Rs.10,000 if B’s house is burnt. This is a contingent contract.

32. Enforcement of Contracts contingent on an event happening.

Contingent contracts to do or not to do anything in an uncertain future event happens, cannot be enforced by law unless and until that event has happened.
If the event becomes impossible, such contracts become void.

Illustrations-
(a) A makes a contract with B to buy B’s horse if A survives C. This contract cannot be enforced by the law unless and until B dies in A’s lifetime.

(b) A makes a contract with B to sell a horse to B at a specified price, if C, to whom the horse has been offered, refuse to buy him. The contract cannot be enforced by law unless and until C refuses to buy the horse.

(c) A contracts to pay B a sum of money when B marries C. C dies without being married to B. The contract becomes void.

33. Enforcement of contract contingent on an event not happening.

Contingent contracts to do or not to do anything if an uncertain future event does not happen, can be enforced when the happening of that event becomes impossible, and not before.

Illustration-
A agrees to pay B a sum of money if a certain ship does not return. The ship is sunk. The contract can be enforced when the ship sinks.

34. When event on which contract is contingent to be deemed impossible, if it is the future conduct of a living person.

If the future event on which a contract is contingent is the way in which a person will act at an unspecified time, the event shall be considered to become impossible when such person does anything which renders it impossible that the should so act within any definite time, or otherwise than under further contingencies.

Illustrations-
A agrees to pay B a sum of money if B marries C. C marries D. The marriage of B to C must now be considered impossible, although it is possible that D may die and that C may afterwards marry B.

35. When contracts become void, which are contingent on happening of specified event within fixed time.

Contingent agreements to do or not to do anything, if an impossible event happens, are void, whether the impossibility of the event is known or not to the parties to agreement at the time when it is made.

Illustrations-
(a) A agrees to pay B Rs.1,000 if two straight lines should enclose a space. The agreement is void.

If you are a regular reader, please consider buying the Law PDFs and MCQ Tests. You will love them. You may also support with any amount you like. Thank You.
2020-05-14