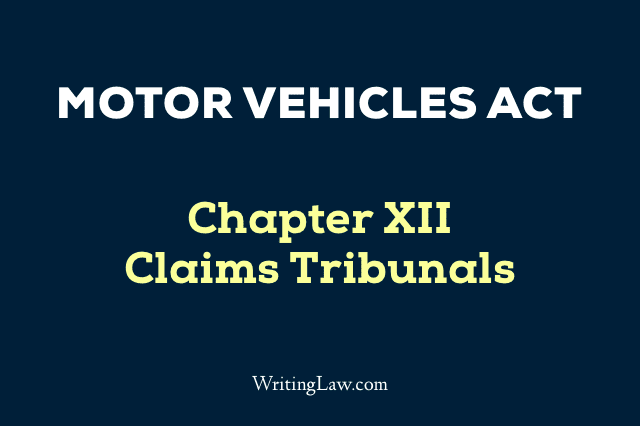 (1) A State Government may, by notification in the Official Gazette, constitute one or more Motor Accidents Claims Tribunals (hereafter in this Chapter referred to as Claims Tribunal) for such area as may be specified in the notification for the purpose of adjudicating upon claims for compensation in respect of accidents involving the death of, or bodily injury to, persons arising out of the use of motor vehicles, or damages to any property of a third party so arising, or both.

(2) A Claims Tribunal shall consist of such number of members as the State Government may think fit to appoint and where it consists of two or more members, one of them shall be appointed as the Chairman thereof.

(4) Where two or more Claims Tribunals are constituted for any area, the State Government, may by general or special order, regulate the distribution of business among them.

(1) An application for compensation arising out of an accident of the nature specified in sub-section (1) of section 165 may be made-
(a) by the person who has sustained the injury; or

(b) by the owner of the property; or

(c) where death has resulted from the accident, by all or any of the legal representatives of the deceased; or

(d) by any agent duly authorised by the person injured or all or any of the legal representatives of the deceased, as the case may be:

(2) Every application under sub-section (1) shall be made, at the option of the claimant, either to the Claims Tribunal having jurisdiction over the area in which the accident occurred or to the Claims Tribunal within the local limits of whose jurisdiction the claimant resides or carries on business or within the local limits of whose jurisdiction the defendant resides, and shall be in such form and contain such particulars as may be prescribed:
Provided that where no claim for compensation under section 140 is made in such application, the application shall contain a separate statement to that effect immediately before the signature of the applicant.

(4) The Claims Tribunal shall treat any report of accidents forwarded to it under sub-section (6) of section 158 as an application for compensation under this Act.

Section 167. Option regarding claims for compensation in certain cases.

Section 168. Award of the Claims Tribunal.

(1) On receipt of an application for compensation made under section 166, the Claims Tribunal shall, after giving notice of the application to the insurer and after giving the parties (including the insurer) an opportunity of being heard, hold an inquiry into the claim or, as the case may be, each of the claims and, subject to the provisions of section 162 may make an award determining the amount of compensation which appears to it to be just and specifying the person or persons to whom compensation shall be paid and in making the award the Claims Tribunal shall specify the amount which shall be paid by the insurer or owner or driver of the vehicle involved in the accident or by all or any of them, as the case may be:

Provided that where such application makes a claim for compensation under section 140 in respect of the death or permanent disablement of any person, such claim and any other claim (whether made in such application or otherwise) for compensation in respect of such death or permanent disablement shall be disposed of in accordance with the provisions of Chapter X.

(2) The Claims Tribunal shall arrange to deliver copies of the award to the parties concerned expeditiously and in any case within a period of fifteen days from the date of the award.

(3) When an award is made under this section, the person who is required to pay any amount in terms of such award shall, within thirty days of the date of announcing the award by the Claims Tribunal, deposit the entire amount awarded in such manner as the Claims Tribunal may direct.

(1) In holding any inquiry under section 168, the Claims Tribunal may, subject to any rules that may be made in this behalf, follow such summary procedure as it thinks fit.

(2) The Claims Tribunal shall have all the powers of a Civil Court for the purpose of taking evidence on oath and of enforcing the attendance of witnesses and of compelling the discovery and production of documents and material objects and for such other purposes as may be prescribed; and the Claims Tribunal shall be deemed to be a Civil Court for all the purposes of section 195 and Chapter XXVI of the Code of Criminal Procedure, 1973 (2 of 1974).

(3) Subject to any rules that may be made in this behalf, the Claims Tribunal may, for the purpose of adjudicating upon any claim for compensation, choose one or more persons possessing special knowledge of any matter relevant to the inquiry to assist it in holding the inquiry.

Where in the course of any inquiry, the Claims Tribunal is satisfied that-
(a) there is collusion between the person making the claim and the person against whom the claim is made, or

(b) the person against whom the claim is made has failed to contest the claim,

it may, for reasons to be recorded in writing, direct that the insurer who may be liable in respect of such claim, shall be impleaded as a party to the proceeding and the insurer so impleaded shall thereupon have, without prejudice to the provisions contained in sub-section (2) of section 149, the right to contest the claim on all or any of the grounds that are available to the person against whom the claim has been made.

Section 171. Award of interest where any claim is allowed.

Where any Claims Tribunal allows a claim for compensation made under this Act, such Tribunal may direct that in addition to the amount of compensation simple interest shall also be paid at such rate and from such date not earlier than the date of making the claim as it may specify in this behalf.

(1) Any Claims Tribunal adjudicating upon any claim for compensation under this Act, may in any case where it is satisfied for reasons to be recorded by it in writing that-
(a) the policy of insurance is void on the ground that it was obtained by representation of fact which was false in any material particular, or

(b) any party or insurer has put forward a false or vexatious claim or defence,

(2) No Claims Tribunal shall pass an order for special costs under sub-section (1) for any amount exceeding one thousand rupees.

(3) No person or insurer against whom an order has been made under this section shall, by reason thereof be exempted from any criminal liability in respect of such mis-representation, claim or defence as is referred to in sub-section (1).

(1) Subject to the provisions of sub-section (2), any person aggrieved by an award of a Claims Tribunal may, within ninety days from the date of the award, prefer an appeal to the High Court:

Provided that no appeal by the person who is required to pay any amount in terms of such award shall be entertained by the High Court unless he has deposited with it twenty-five thousand rupees or fifty per cent of the amount so awarded, whichever is less, in the manner directed by the High Court:

Provided further that the High Court may entertain the appeal after the expiry of the said period of ninety days, if it is satisfied that the appellant was prevented by sufficient cause from preferring the appeal in time.

(2) No appeal shall lie against any award of a Claims Tribunal if the amount in dispute in the appeal is less than ten thousand rupees.

Section 174. Recovery of money from insurer as arrear of land revenue.

Where any amount is due from any person under an award, the Claims Tribunal may, on an application made to it by the person entitled to the amount, issue a certificate for the amount to the Collector and the Collector shall proceed to recover the same in the same manner as an arrear of land revenue.

A State Government may make rules for the purpose of carrying into effect the provisions of sections 165 to 174, and in particular, such rules may provide for all or any of the following matters, namely:-
(a) the form of application for claims for compensation and the particulars it may contain, and the fees, if any, to be paid in respect of such applications;

(b) the procedure to be followed by a Claims Tribunal in holding an inquiry under this Chapter;

(c) the powers vested in a Civil Court which may be exercised by a Claims Tribunal;

(d) the form and the manner in which and the fees (if any) on payment of which an appeal may be preferred against an award of a Claims Tribunal; and

(e) any other matter which is to be, or may be, prescribed.

If you are a regular reader, please consider buying the Law PDFs and MCQ Tests. You will love them. You may also support with any amount you like. Thank You.
2019-12-15