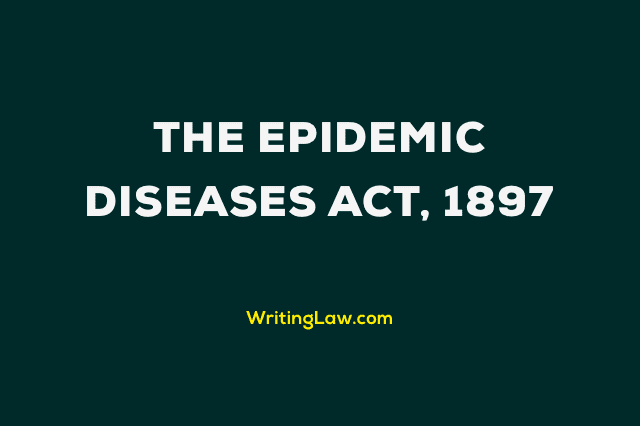 An Act to provide for the better prevention of the spread of Dangerous Epidemic Diseases.

WHEREAS it is expedient to provide for the better prevention of the spread of dangerous epidemic disease; It is hereby enacted as follows:

(2) It extends to the whole of India except the territories which, immediately before the 1st
November, 1956, were comprised in Part B States.

2. Power to take special measures and prescribe regulations as to dangerous epidemic disease.

(1) When at any time the State Government is satisfied that the State or any part thereof is visited by, or threatened with, an outbreak of any dangerous epidemic disease, the State Government, if it thinks that the ordinary provisions of the law for the time being in force are insufficient for the purpose, may take, or require or empower any person to take, such measures and, by public notice, prescribe such temporary regulations to be observed by the public or by any person or class of persons as it shall deem necessary to prevent the outbreak of such disease or the spread thereof, and may determine in what manner and by whom any expenses incurred (including compensation if any) shall be defrayed.

(2) In particular and without prejudice to the generality of the foregoing provisions, the State Government may take measures and prescribe regulations for:-

2A. Powers of Central Government.

When the Central Government is satisfied that India or any part thereof is visited by, or threatened with, an outbreak of any dangerous epidemic disease and that the ordinary provisions of the law for the time being in force are insufficient to prevent the outbreak of such disease or the spread thereof, the Central Government may take measures and prescribe regulations for the inspection of any ship or vessel leaving or arriving at any port in the territories to which this Act extends and for such detention thereof, or of any person intending to sail therein, or arriving thereby, as may be necessary.

Any person disobeying any regulation or order made under this Act shall be deemed to have committed an offence punishable under section 188 of the Indian Penal Code (45 of 1860).

4. Protection to persons acting under Act.

No suit or other legal proceeding shall lie against any person for anything done or in good faith intended to be done under this Act.