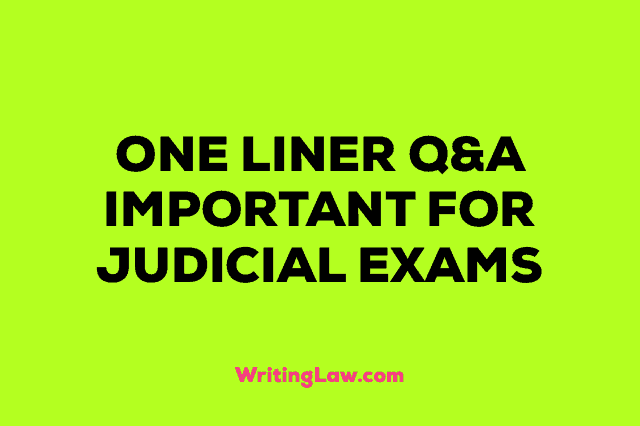 One liner questions and answers. Important for judicial exams.

2. Who is also known as the Shakespeare of India?
Ans. Kalidasa

3. The book ‘Indica’ is written by –
Ans. Megasthenes

4. Who gave Samudra Gupta title of ‘Napoleon of India’?
Ans. A.V Smith who was an historian

5. Who is known as the second Alexander of India and was given the title of ‘sikandar-i-sani’ ?
Ans. Alauddin Khilji

6. Who is known as the morning star of Indian renaissance?
Ans. Raja Ram Mohan Roy

7. Where was the first Buddhist assembly held?
Ans. Rajgraha

8. Which pitakas are known as the tripitakas of Buddhism?
Ans. Sutta pitaka, Vinay pitaka and Abhidam pitaka.

9. Who was given the title of ‘Lakh Baksh’?
Ans. Qutb-ud-din Aibak

11. Who is known as wizard of hockey?
Ans. Major Dhyanchand

12. Who was the first foreigner to receive Bharat Ratna?
Ans. Khan Abdul Gaffar Khan in 1987

13. Who was the first women to recieve Bharat ratna?
Ans. Indira Gandhi in 1972

14. Who is known as the father of Sanskrit?
Ans. Panini

15. Who was the founder of league of nations?
Ans. Woodrov Wilson

These questions and answers have been submitted by a website visitor. You too are welcome to publish Law Notes, Articles, Q&A etc on this website.

Can a Person be Punished for Violating Home Quarantine (2020)