8 Classification of Rights, Duties and Theories of Rights 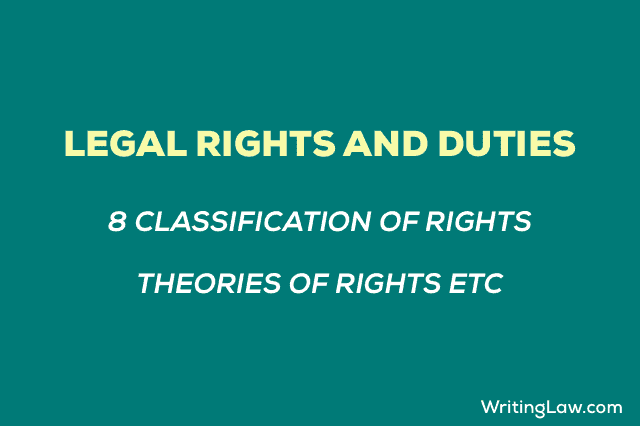 Right means claims, titles, liberties, powers, and immunities summed together. Legal right is an interest which is recognised and protected by the law.

Time barred debt is an imperfect right because it is a right which the law recognizes but is not enforceable.

2. Right in Rem and Right in Personam

Right in Rem → against the whole world.
For Example, the Right to go on a public road.

A person’s proprietary rights constitute his estate, his assets, and his property. These rights have some economic or monetary significance and are elements of wealth.
For Example, Money in a man’s pocket or bank or land, houses, etc. are proprietary rights.

On the other hand, personal rights are elements of a person’s well being. They have no monetary value.
For Example, Right of reputation, personal liberty, freedom from bodily harm, etc.

Accessory right
For Example, The right to maintenance from husband raises from the rights of the wife being lawfully wedded

Vested right
For Example, A is father of S. After the death of A, the property of A will vest in S. It is the vested right of S.

Contingent right
For Example, A has three daughters B, C, and D. A contracts with E, that A will give Rs 2 lakhs to E if E married B. The right of E is contingent in nature.

The violation of public rights affects the community as a whole. They are called crimes. Violation of private rights is called civil injuries or tort.

According to this theory, a right is an inherent element of the human will. The subject matter of right is derived from human will. The theory suggests that it is through a right that a man expresses his will over an object.

However, Salmond criticised this theory of Ehering.

A duty is an obligatory act. It means it is an act the opposite of which would be a wrong. Thus duties and wrongs are generally co-related. The commission of a wrong is the breach of duty. And the performance of a duty is avoidance of wrong.

A duty may be either primary or secondary. Primary duty is independent. Secondary duty is dependent, but exists for the enforcement of other duties.

If you are a regular reader, please consider buying the Law PDFs and MCQ Tests. You will love them. You may also support with any amount you like. Thank You.
2020-04-30