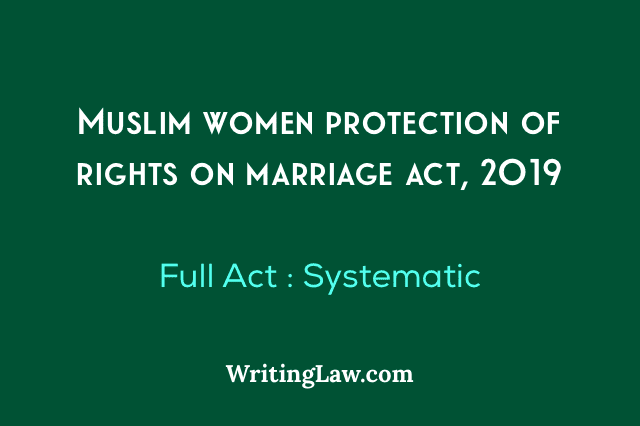 An Act to protect the rights of married Muslim women and to prohibit divorce by pronouncing talaq by their husbands and to provide for matters connected therewith or incidental thereto.

BE it enacted by Parliament in the Seventieth Year of the Republic of India as follows:-

(1) This Act may be called the Muslim Women (Protection of Rights on Marriage) Act, 2019.

(2) It shall extend to the whole of India except the State of Jammu and Kashmir.

In this Act, unless the context otherwise requires,

(b) “Magistrate” means a Judicial Magistrate of the first class exercising jurisdiction under the Code of Criminal Procedure, 1973, in the area where the married Muslim woman resides; and

(c) “talaq” means talaq-e-biddat or any other similar form of talaq having the effect of instantaneous and irrevocable divorce pronounced by a Muslim husband.

CHAPTER II – DECLARATION OF TALAQ TO BE VOID AND ILLEGAL

3. Talaq to be void and illegal.

Any pronouncement of talaq by a Muslim husband upon his wife, by words, either spoken or written or in electronic form or in any other manner whatsoever, shall be void and illegal.

Any Muslim husband who pronounces talaq referred to in section 3 upon his wife shall be punished with imprisonment for a term which may extend to three years, and shall also be liable to fine.

Without prejudice to the generality of the provisions contained in any other law for the time being in force, a married Muslim woman upon whom talaq is pronounced shall be entitled to receive from her husband such amount of subsistence allowance, for her and dependent children, as may be determined by the Magistrate.

Notwithstanding anything contained in any other law for the time being in force, a married Muslim woman shall be entitled to custody of her minor children in the event of pronouncement of talaq by her husband, in such manner as may be determined by the Magistrate.

7. Offence to be cognizable, compoundable, etc.

Notwithstanding anything contained in the Code of Criminal Procedure, 1973,-

(a) an offence punishable under this Act shall be cognizable, if information relating to the commission of the offence is given to an officer in charge of a police station by the married Muslim woman upon whom talaq is pronounced or any person related to her by blood or marriage;

(b) an offence punishable under this Act shall be compoundable, at the instance of the married Muslim woman upon whom talaq is pronounced with the permission of the Magistrate, on such terms and conditions as he may determine;

(c) no person accused of an offence punishable under this Act shall be released on bail unless the Magistrate, on an application filed by the accused and after hearing the married Muslim woman upon whom talaq is pronounced, is satisfied that there are reasonable grounds for granting bail to such person.

(2) Notwithstanding such repeal, anything done or any action taken under the Muslim Women (Protection of Rights on Marriage) Second Ordinance, 2019 (Ord. 4 of 2019), shall be deemed to have been done or taken under the provisions of this Act.