Definition and Circumstances of Quasi Contracts in the Contract Act 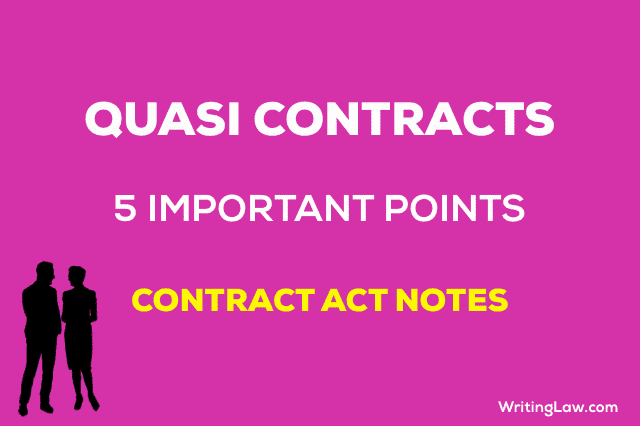 The word Quasi means pseudo. The term pseudo means resembling or imitating or supposed or purporting to be but not really so. In simpler terms, it means false or not genuine. Thus we can also say that Quasi Contract is a Pseudo-Contract.

Section 68 to 72 of the Indian Contract Act deal with certain relations resembling those created by contract. These obligations are known as Quasi Contracts.

Quasi Contract is not a full-fledged contract because there is no offer and acceptance by the parties. But there are some circumstances where the contractual obligation arises. These five circumstances are as follows:-

1. Section 68 of Contract Act: CLAIM FOR NECESSARIES SUPPLIED TO PERSON INCAPABLE OF CONTRACTING, OR ON HIS ACCOUNT

Where one person supplies necessaries suited to the condition in life of a person who is incompetent to contract (minor or lunatic) or to anyone whom such incompetent person is legally bound to support.

For Example, to a lunatic’s wife or children.

The person who is supplying is entitled to recover from the property of such an incompetent person.

Note: Such an incompetent person is not personally liable.

For the application of this section following two essentials are there:-
I. One person is interested in the payment of money, which is why he pays for it.
II. Another person is bound by law to pay the same, but he fails to pay.

The person, so making the payment is entitled to recover the amount by the person who was bound to pay.

For the application of this section following conditions are to be satisfied:-
I. A person should lawfully do something for another person or should deliver something to him.
II. If the person making the payment or delivering the thing must not do so gratuitously, which means he should expect payment for the same.
III. The other person should enjoy the benefits of this payment or the delivery of the thing.

Enjoyment of benefit by the defendant is necessary.

4. Section 71 of Contract Act: RESPONSIBILITY OF FINDER OF GOODS

Section 71 is another situation of Quasi Contract when a person is the finder of goods.

Finder of goods is a person who finds goods belonging to another and takes the goods into his custody. Although, as between the finder and the owner of the goods, there is no contract, yet the following responsibility has been fixed by section 71, on the finder of goods.

The position of the finder of goods is similar to bailee.

The finder of goods is bound to take as much care of goods as a man of ordinary prudence would do.

It may be noted that the position of finder of goods is that of a bailee only against the true owner of the goods, and he is bound to return the goods to the owner. Finder’s title is better than everybody except the true owner.

5. Section 72 of Contract Act: LIABILITY OF PERSON TO WHOM MONEY IS PAID, OR THING DELIVERED, BY MISTAKE OR UNDER COERCION