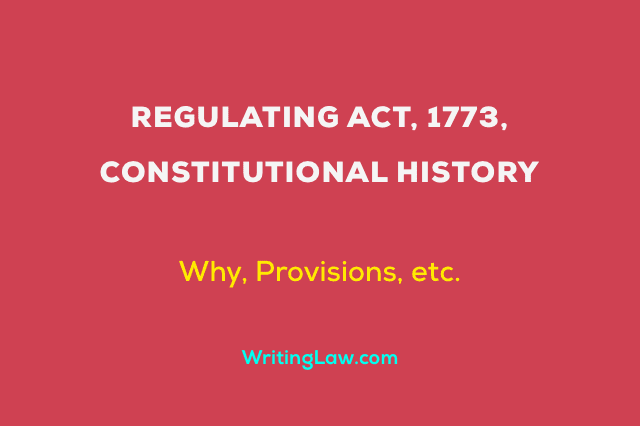 Why Regulating Act, 1773 was Passed

The reasons behind passing the regulating act by the British government were:-

1. The corruption amongst the servants of the East India company was increasing rapidly.

2. All the servants and officers of the East India company started making indirect profit keeping dust in the eye of the British government.

3. There were only civil courts in the company. It lacked proper judicial administration.

4. In England, the public started forming opinions against the company.

5. The company started making policies in fear of losing control over administration.

Provisions of the Regulating Act, 1773

As a consequence of this act, so many changes took place-

2. For supervision over Governor-General, he was subordinated with four members council.

3. At time of war, the Governor-General of Bengal supervises other governors.

4. There was the establishment of the Supreme Court of Calcutta to have control over the Governor-General.

5. The judges and crown of the Supreme Court of Calcutta were appointed by the cabinet of England only.

6. The Act prohibited servants of the company from doing private trade and business.

Why Not Supreme Court of Bengal?

After the passing of the Regulating Act, 1773, the control and supervision of the company came under the British government. The court of directors were instructed to place all important documents coming from India before the British cabinet minister known as chancellor of exchequer (the revenue secretariat of England) and secretary of state in political affairs. Slowly and steadily, England wanted to vent in Indian administration. And to some extent, they were successful too.

It is still said and asked, “what the era it was, were we ransacked or surrendering to be robbed.” Why we could not see the company as a termite to our Indian heritage. The company, in the name of trading, was exploiting Indian labour and took undue advantage of poor people.

Now, we are independent and have a right to free trade and commerce under Article 19 of the Constitution of India. India is now a democratic and sovereign country.