Robbery And Dacoity In The Indian Penal Code 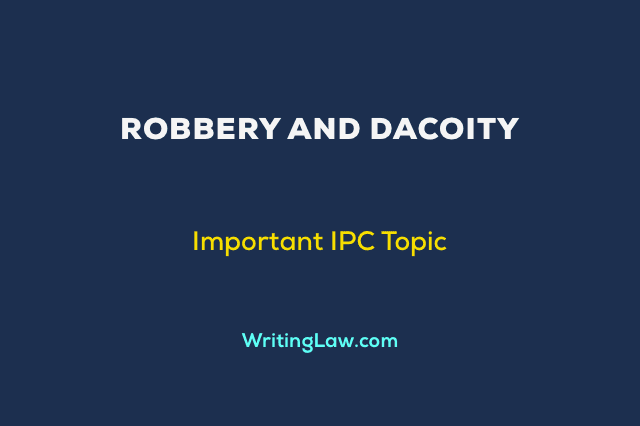 The act of theft becomes robbery when:-

3. The offender, while committing theft, causes other person death, or hurt, or wrongful restraint.

4. The offender attempts to cause the other person to death, hurt or wrongful restraint, or

Note: In a normal act of theft, there is no use of force or intention to cause hurt, death, or wrongful restraint. This is the reason for robbery being an advanced stage of theft. It is the stage when theft becomes robbery.

A went to B’s house for a party. There he found an expensive ring lying on the table of B. A with ill intention takes the ring and puts it in the pocket to take away. When A was trying to escape, B comes to know that his ring is missing. While searching here and around, it was found with A. A in attempting to take away the ring hits B down the floor and runs away. Here A has caused hurt to B while taking away property obtained by the theft.

The act of extortion becomes robbery when:-

1. The offender who is committing extortion is physically present near the person extorted.

2. The offender, by his presence, puts the other person in fear of instant death, or instant hurt, or instant wrongful restraint.

3. The person by causing fear to other person induces him to deliver the thing then and there.

Note: In the act of extortion, there is a threat of a consequence under which a person extorts money or valuables. But in robbery, it is instant fear of death, hurt or wrongful restraint. There is the presence of a person, unlike extortion committed under section 383 of IPC.

A meets B and his child on the hill road. A, in order to extort money from B, takes his child and threatens B that if he would not surrender every valuable he is carrying with him, A will throw his child down from the height. B in fear of losing the child gives his purse and other valuables to B. Here, A has extorted money by putting B under fear of instant death to the child. Here A has committed robbery.

A meets Z on the high road. A by showing his pistol to Z, orders Z to give his purse to A. Z in fear surrenders his purse to A. Here A by putting Z under fear of instant death has induced Z to surrender his purse. Here A has committed robbery.

What Is The Punishment For Robbery

Section 392 of IPC prescribes the punishment for robbery. If any person commits robbery, then he shall be punished for rigorous imprisonment up to ten years. And if the person committing robbery commits robbery on the highway after sunset and before sunrise, then he can be imprisoned up to fourteen years.

What Amounts To Dacoity

Any group of five or more persons who commit dacoity shall be punished for life imprisonment or for rigorous imprisonment up to ten years and shall also be liable for fine.

There are four stages of crime – mens rea, preparation, attempt, and accomplishment of an act. The general rule is that either the attempt is punished or a complete offence. The stage of preparation is not punished.

But this is not so in the case of dacoity. If any person does preparations to commit dacoity, then such person shall be punished for rigorous imprisonment up to ten years and will also be liable for fine.

If you are a regular reader, please consider buying the Law PDFs and MCQ Tests. You will love them. You may also support us with any amount you like. Thank You.
Explore WritingLaw's Homepage
2020-09-01