Section 195 CrPC Explanation of a Confusion 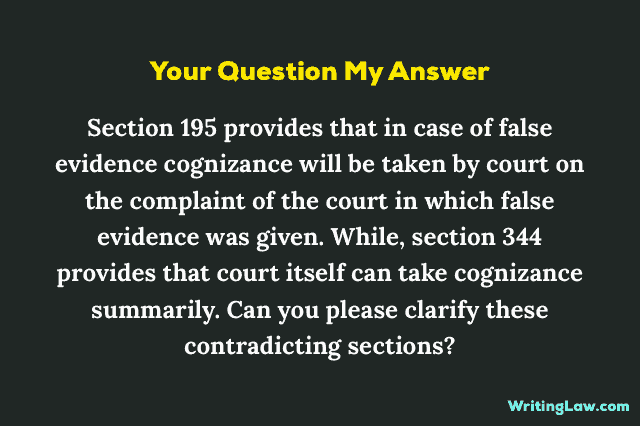 Question asked by a law student:-

Section 195 and 344 are different in there own spheres. No section is inter-related or intervening to that of another.

Section 340 prescribes the procedure as to how a complaint is to be made under section 195. The court if receives application under section 340, cannot directly proceed to issue notice against whom such application is made. As the complaint initially requires it to be inquired by the court for satisfaction of matter put before. After preliminary inquiry court proceeds into the matter.

Whereas section 344 talks of giving false evidence during disposition of trial proceedings. A witness if intentionally gives false evidence in court during trial and at the stage when trial is at its peak stage of disposing matter, then such witness needs to be tried summarily in order to save time of the court and in interest of justice, because proceedings can not be initiated again and again.

Must Read related to this topic that you read above.

If you are a regular reader, please consider buying the Law PDFs and MCQ Tests. You will love them. You may also support with any amount you like. Thank You.
2019-07-10