PDFs and Tests are useful for
Judiciary, CLAT, AIBE and all law exams. 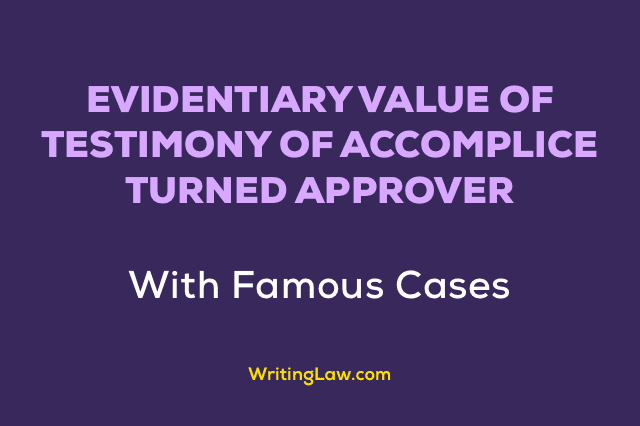 An accomplice was defined as someone who voluntarily co-operates with, and helps others in the commission of the crime. He is said to be ‘particeps criminis‘ – a participator in the actual crime.

When an accomplice gives testimony against his co-partners in crime in order to save or free himself from the liability of offence committed, then he is said to be accomplice turned approver.

Article 20(3) of the Constitution of India says a person cannot be compelled to be a witness against himself. But in such a situation, if an accomplice gives testimony against himself and others involved in crime, he is free from the criminal liability and is tendered pardon by the court. The question is to what extent the testimony of an accomplice can be relied upon. Two provisions in the Act touch this problem.

Section 133 of the Indian Evidence Act categorically declares that an accomplice is a competent witness, and the court may convict on the basis of such evidence, and the conviction will not be illegal merely because it proceeds upon the uncorroborated testimony of an accomplice.

The other provision dealing with this matter is illustration (b) of Section 114, which says that the court may presume that an accomplice is unworthy of credit unless corroborated in material particulars.

Reasons Why Corroboration is Necessary

The reasons why corroboration has been considered necessary are that-

The true meaning of corroboration is best explained in the case of: R vs. Baskerville

It was said that the uncorroborated evidence of an accomplice is admissible in law, but proper caution is taken while convicting a person on the basis of such evidence. And if after appropriate caution, the court convicts a person, the legality of such a conviction cannot be questioned merely upon the ground that accomplice testimony was uncorroborated.

Nature and Extent of Accomplice Evidence

The evidence of an accomplice must be confirmed not only as of the circumstances of the crime but also as the identity of the prisoner.

The court should find that there is nothing inherently improbable in the evidence given by the approver, and there is no finding that the approver has given false evidence. Another test remains of corroboration, and it is not always necessary that his evidence receives sufficient corroboration.

Narayan Chetanram Chaudhary vs. the State of Maharashtra, 2000

Court held that the court must look at the broad spectrum of the approver’s version and then find out whether there is other evidence to corroborate and lend assurance to that version.

And the court also added that corroboration need not be in the form of ocular testimony. It may be even in the form of circumstantial evidence, and the corroborative evidence must be independent and not vague or unreliable.

Victim of Rape as Accomplice

In Karnel Singh vs. the State of Madhya Pradesh, 1995

Court held that victim of rape cannot be put at par with an accomplice. She is undoubtedly a competent witness under section 118 of the Indian Evidence Act, and therefore, her evidence need not be tested with the same amount of suspicion as that of an accomplice.

The testimony of an accomplice is evidence under section 3 of the Indian Evidence Act and has to be dealt with as such. The evidence is of a tainted character and is weak; nevertheless, it is evidence and may be acted upon subject to corroboration in material particulars.

What is the Credibility of Accomplice Evidence

The Supreme Court was of the view that though an accomplice is undoubtedly a competent witness, the very fact that he has participated in the commission of the offence introduces a serious stain in his evidence and courts are naturally reluctant to act on such tainted evidence unless it is corroborated in material particulars by other independent witnesses.

However, one should not expect that such independent corroboration should cover the whole of the prosecution or even all material particulars. On the other hand, it would not be safe to act upon such evidence merely because it is corroborated in minor particulars.

Because in such a case, the corroboration does not afford the necessary assurance that the main story disclosed by approver can be reasonably accepted.

The Supreme Court thus said, first and essential condition to consider is whether accomplice evidence is a reliable witness. Only when the question is satisfied, the court will go to the question of corroboration.

10 Job and Career Options after Law