In: Articles, How To Be A Successful Lawyer 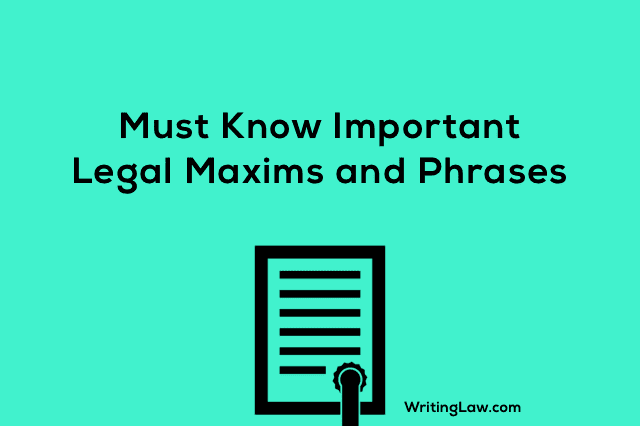 A list of important legal maxims and foreign words to assist you in attaining a tight grasp over the aspects of Legal Aptitude.

What are Legal Maxims?
Legal maxims are established principles of law that are universally admitted, and people in the legal field are very well aware of these words. They are mostly Latin words or a combination of few words.

Just like in Geometry, we have axioms; in law, we have legal maxims and phrases. Maxims are used in legal paperwork and are also asked in law exams like CLAT, Judiciary, and semester exams.

1. Ab Initio – From the beginning.

2. Actionable per se – The very act is punishable and no proof of damage is required.

4. Actori incumbit onus probandi – The burden of proof is on the plaintiff.

6. Ad hoc – For the particular end or case at hand.

7. Alibi – At another place, elsewhere.

8. Amicus Curiae – A friend of court or member of the Bar who is appointed to assist the Court.

9. Ante Litem Motam – Before suit brought; before controversy instituted, or spoken before a lawsuit is brought.

11. Audi alteram partem – No man shall be condemned unheard.

13. Bona vacantia – Goods without an owner.

14. Boni judicis est ampliare jurisdictionem – It is the part of a good judge to enlarge his jurisdiction, i.e. remedial authority.

15. Caveat – A caution registered with the public court to indicate to the officials that they are not to act in the matter mentioned in the caveat without first giving notice to the caveator.

19. Certiorari – A writ by which orders passed by an inferior court is quashed.

21. Corpus delicti – The facts and circumstances constituting a crime and Concrete evidence of a crime, such as a corpse (dead body).

Also, it refers to the principle that ‘a crime must be proved to have occurred before a person can be convicted of committing that crime.’ (This definition is mostly used in Western Law.)

Or, A common law principle whereby judges will not sit in judgment of extremely minor transgressions (offence, wrongdoings) of the law.

28. Dictum – Statement of law made by judge in the course of the decision but not necessary to the decision itself.

30. Detinue – Tort of wrongfully holding goods which belong to someone else.

31. Donatio mortis causa – Gift because of death. Or a future gift given in expectation of the donor’s imminent death and only delivered upon the donor’s death.

35. Ex parte – Proceedings in the absence of the other party.

36. Ex post facto – Out of the aftermath, or After the fact.

According to Wikipedia, It is a law that retroactively changes the legal consequences (or status) of actions that were committed, or relationships that existed, before the enactment of the law. In criminal law, it may criminalise actions that were legal when committed; it may aggravate a crime by bringing it into a more severe category than it was in when it was committed; it may change the punishment prescribed for a crime, as by adding new penalties or extending sentences; or it may alter the rules of evidence in order to make conviction for a crime likelier than it would have been when the deed was committed.

39. Fraus est celare fraudem – It is a fraud to conceal a fraud.

40. Functus officio – No longer having power or jurisdiction.

41. Furiosi nulla voluntas est – Mentally impaired or mentally incapable persons cannot validly sign a will, contract or form the frame of mind necessary to commit a crime. or a person with mental illness has no free will.

42. Habeas corpus – A writ to have the body of a person to be brought in before the judge.

In other words, A person who is unaware of a law may not escape liability for violating that law merely because one was unaware of its content.

48. In personam – A proceeding in which relief I sought against a specific person.

49. Innuendo – Spoken words which are defamatory because they have a double meaning.

52. Inter vivos – Between living people. (especially of a gift as opposed to a legacy)

53. Interest Reipublicae Ut Sit Finis Litium – It means it is in the interest of the state that there should be an end to litigation.

55. Jus in personam – Right against a specific person.

56. Jus in rem – Right against the world at large.

Or in other words, A system of law based on fundamental ideas of right and wrong that is Natural Law.

58. Jus Necessitatis – It means a person’s right to do what is required for which no threat of legal punishment is a dissuasion.

Dissuasion means: the action or process of trying to persuade someone not to take a particular course of action.

Question asked by one of you: I have a doubt about the maxim jus necessitatis. Does it come under section 81 or 87 of IPC?

Answer: This is called the doctrine of necessity. It means a person doing a thing under compulsion of situation. It is not considered a wrongful act. It comes under the ambit of section 81 of IPC.

62. Justitia nemini neganda est – Justice is to be denied to nobody.

65. Lex non a rege est violanda – The law must not be violated even by the king.

Or, Mala in se is ‘A term that signifies crime that is considered wrong in and of itself.’

For Example, Most human beings believe that murder, rape, and theft are wrong, regardless of whether a law governs such conduct or where the conduct occurs and is thus recognizably malum in se.

69. Malum prohibitum – In a way opposite of Malum in se.

It means ‘Crimes are criminal not because they are inherently bad, but because the act is prohibited by the law of the state.’

70. Mandamus – ‘We command’. A writ of command issued by a Higher Court to Government/Public Authority, to compel the performance of a public duty.

72. Misnomer – A wrong or inaccurate name or term.

76. Nemo bis punitur pro eodem delicto – Nobody can be twice punished for the same offence.

79. Nemo moriturus praesumitur mentire – A man will not meet his maker (God) with a lie in his mouth or in other words ‘No man at the point of death is presumed to lie.’ (This maxim is related to dying declaration)

80. Nemo Potest esse tenens et dominus – Nobody can be both a landlord and a tenant of the same property.

81. Nolle prosequi – A formal notice of abandonment by a plaintiff or prosecutor of all or part of a suit.

82. Novation – Transaction in which a new contact is agreed by all parties to replace an existing contract.

84. Non Sequitur – A statement (such as a response) that does not follow logically from or is not clearly related to anything previously said.

85. Obiter dictum – Things said by the way. It is generally used in law to refer to an opinion or non-necessary remark made by a judge. It does not act as a precedent.

In other words, Obiter dictum means “that which is said in passing,” an incidental statement. Specifically, in law, it refers to a passage in a judicial opinion which is not necessary for the decision of the case before the court. Such statements lack the force of precedent but may nevertheless be significant.

87. Pacta Sunt Servanda – Agreements must be kept. or Agreements are legally binding.

In International Agreements it means ‘every treaty in force is binding upon the parties to it and must be performed by them in good faith.’

88. Pari passu – With an equal step. Read more about it on Wikipedia.

89. Particeps criminis – A participator in the actual crime/partner in crime.

In other words, The decision is made by the court (or at least, a majority of the court) acting collectively.

92. Persona non grata – A person who is unacceptable or unwelcome.

Opposite of persona non grata is persona grata.

Also, In diplomacy, a persona non grata is a foreign person whose entering or remaining in a particular country is prohibited by that country’s government.

94. Alimony – A husband’s (or wife’s) provision for a spouse after separation or divorce; maintenance.

Palimony – Money which a man pays to a woman with whom he has been living and from whom he is separated. Palimony has slightly different meanings in different jurisdictions.

98. Quantum meruit – What one has earned. or The amount he deserves.

In other words, A reasonable sum of money to be paid for services rendered or work done when the amount due is not stipulated (specified, written down) in a legally enforceable contract.

99. Qui facit per alium, facit per se – He who acts through another acts himself.

In simple words, It is a fundamental legal maxim of the law of agency. It is a maxim often stated in discussing the liability of the employer for the act of employee in terms of vicarious (indirect, secondhand) liability.

100. Quid pro quo – Something for something.

103. Ratio decidendi – Principle or reason underlying a court judgement. or The rule of law on which a judicial decision is based.

For example, There are circumstances when an employer is liable for acts of employees performed within the course of their employment. This rule is also called the master-servant rule.

105. Res ipsa loquitor – The thing speaks for itself.

107. Res Judicata Pro Veritate Accipitur – It means that a judicial decision must be accepted as correct.

109. Salus populi est suprema lex – The welfare of the is the supreme law.

112. Sine qua non – “without which nothing”. An essential condition. A thing that is absolutely necessary. Basically a component of an argument that, if debunked, causes the entire argument to crumble.

116. Veto – Ban or order not to allow something to become law, even if it has been passed by a parliament.

119. Volenti non fit injuria – Damage suffered by consent gives no cause of action.

In other words, If someone willingly places himself in a position where he knows that harm might result, then he is not able (allowed) to bring a claim against the other party in tort or delict (a violation of the law).

121. Waiver – Voluntarily giving up or removing the conditions.