Comparison Between Britain’s House of Lords and USA Senate 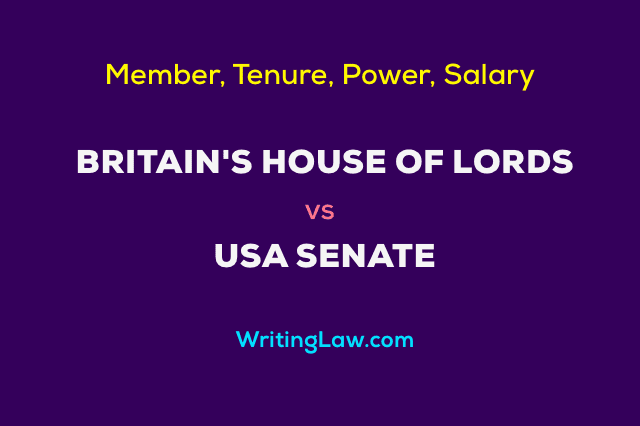 Note: Facts and figures mentioned here are as of June 2021.

Members of the Senate and House of Lords

Members of the Senate (senators) are chosen directly by the people. In comparison, there are a few distinct ways to be a member of the House of Lords.

Tenure of Office of Members of Senate and House of Lords

The tenure of the office of senators is six years. On the other hand, the period of office of life and hereditary peers in the House of Lords is for the rest of their lives, and the Bishops sit in the office until they retire as a Bishop.

Can the House of Lords and Senate Introduce Legislation?

Whereas money bills are not introduced in the Senate of USA, and accordingly, the Senate cannot make changes to the money bill. The Senate cannot amend proposed laws to implement taxation or proposed legislation that appropriates for revenue or money for the ordinary annual services of the Government. But the Senate can send bills back to the House of Representatives with a statement requesting the amendments.

Remuneration of the Members of Senate and House of Lords

The members of the House of Lords who do not get salaries can claim a flat rate attendance allowance of £153 or £305 (new rate from 1st April 2018). Or they may also prefer not to receive any claim for each day of attendance in the House.

Strength of the Senate and House of Lords

If you are a regular reader, please consider buying the Law PDFs and MCQ Tests. You will love them. You may also support with any amount you like. Thank You.
2021-06-16