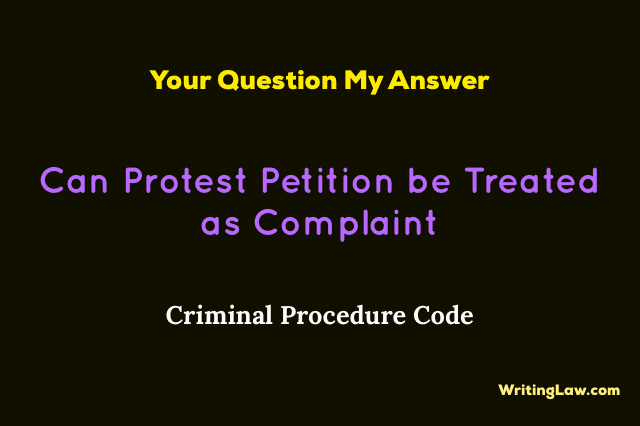 Law Question: Police has submitted the final report under section 173(2) of the Criminal Procedure Code, saying that offence is of civil nature. The complainant fills a protest petition, and on that basis, the court takes the cognizance of the offence.

So what procedure court will follow, whether it is a case instituted on the police report or on the complaint, since a protest petition is treated as a complaint by the magistrate?

Answer: The issue does not seem to be complicated. Here the police, after a complete investigation, submits its report under section 173(2).

It is popularly known as closure report or final report. And if in case the report signifies that offence is of civil nature and magistrate on protest petition filed by complainant or informant takes cognizance of the same then the petition will be treated as complaint and Magistrate can proceed under section 200 and section 202 of the Criminal Procedure Code respectively. (Vishnu Kumari vs. State of UP, SC, 2017).

The magistrate will examine the complainant and witnesses under section 200 and may issue the process. But he can, on the other side, postpone the issue process for inquiry to ascertain that complaint is not frivolous and is genuine. And it is also not necessary that he may examine all witnesses.

But if it appears to the magistrate that case is exclusively triable by the court of session, then he shall examine all witnesses because the offence may be graver, so ensuring about the complaint is must.

And after all process of examination, if magistrate feels that sufficient grounds exist to proceed, then he may under section 204 of CrPC send a summon or warrant as per the requirement of the case.

Whether Protest Petition is Always Treated as Complaint

Follow up Question: What will happen if magistrate directly issues process under section 204? Will it vitiate the trial or not? And also whether protest petition is always taken as complaint because that’s the usual process of natural justice that the other side is always given the opportunity to present his case?

Answer: It is the satisfaction of the magistrate to treat protest petition as a complaint. It is not always mandatory. The magistrate may either accept it, drop the proceeding if no sufficient grounds exist, or may direct for further investigation.

If the protest petition fulfills the requirement of a complaint, then the magistrate may treat it as a complaint and deal with it accordingly. If the proceedings of the court do not prejudice the accused, then it will not vitiate the trial.

WritingLaw » Law Q&A » Can Protest Petition be Treated as Complaint