3 Differences Between an Expert Witness and an Ordinary Witness 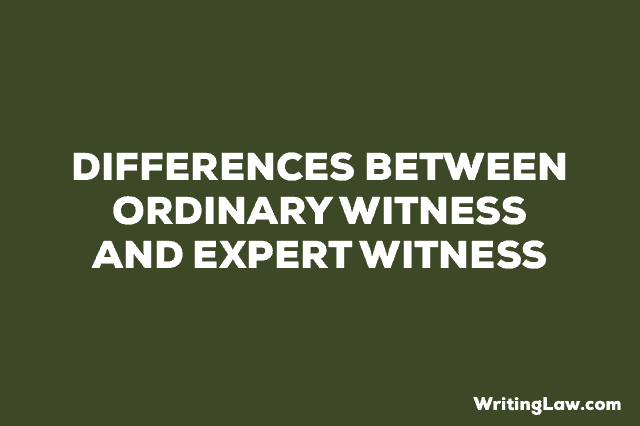 There are three major differences between an expert witness and an ordinary witness. They are as follows.

1. An expert witness gives evidence of his opinion.

An ordinary witness is a witness of fact and gives evidence of those facts which are under inquiry.

2. The expert witness supports his evidence by the experiments which have been performed by him in the absence of the opposite party.

The ordinary witness is available to the opposite party for veracity (truthfulness, accuracy, correctness, faithfulness, fidelity) (refer to section 146 of the Evidence Act).

3. The expert gives the rules and reasons which support his opinion. For example: If a medical expert gives an opinion on symptoms or after-effects of a particular poison, then he may also refer to the book in support of his opinion, based on which he has opined (suggest, comment, remark, declare).

The ordinary witness gives evidence of what he has perceived by his senses (eyes, ear, nose, skin, etc.)

The significant difference between an expert witness and an ordinary witness is personal knowledge. An expert may use their knowledge or skill to draw conclusions, whereas ordinary witness can base their opinion only on what they observed.

Read Next:
1. Hostile Witness Under Evidence Act
2. Modes of Impeaching the Credit of Witness
3. Statement of Eye Witness or Opinion of Doctor? What Matters More in a Rape Case?