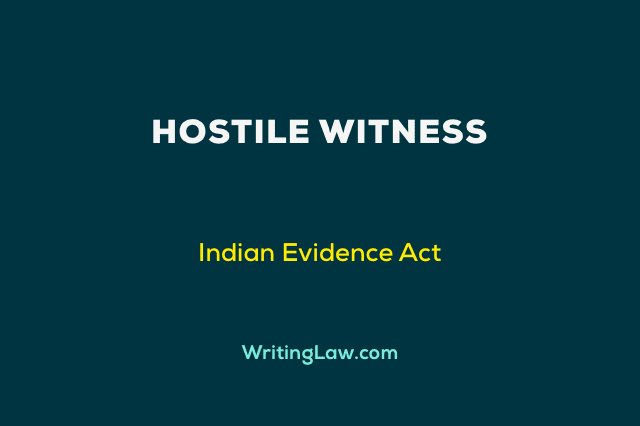 HEADINGS:
1. Who is Hostile Witness
2. Can a party cross-examine its own witness?
3. What can be asked in cross examination of hostile witness?
4. Evidentiary Value of Hostile Witness
5. Satpal vs. Delhi Administration, 1976
6. Atmaram and ors vs. State of M.P
7. Hemudan Nanbha Gadhvi vs. State of Gujarat, 2016

Who is Hostile Witness

A witness becomes hostile when he makes a statement against the interests of the party who called him. When the party’s own witness denies to give a statement in his favour before the court, then it is said that the witness has become hostile.

There can be many reasons for becoming a hostile witness. It may be the reason that the other party is threatening the witness. Or he is in fear that if he gives a statement against the accused, his life will be in danger or any other reason.

Can a party cross-examine its own witness?

Section 154 of the Indian Evidence Act talks about the hostile witness. This section enables the court to permit the party to cross-examine his own witness, who has become hostile.

The general rule is that a party can cross-examine opposite party witnesses, but it is an exception to this rule. If the witness becomes hostile, then the party may cross-examine its own witness with the permission of the court.

It’s the discretionary power of the court to permit the party for cross-examining its own witness. If the court is satisfied with the fact that, in the interest of justice and fair hearing, the party must be allowed to cross-examine, then only the court permits.

What can be asked in cross examination of hostile witness?

If the witness of the party turns hostile, he may be asked:

1. Leading questions under section 143 of the Evidence Act to testify his truthfulness.

2. Questions related to previous statements given in writing under section 145 of the Evidence Act. This section permits contradiction as to former statements in writing.

3. Questions which tend to test the veracity of witness and his status in life under section 146 of the Evidence Act.

If the witness turns hostile and gives a statement against the party who calls him, then what would be the credibility of such a statement which is made by the hostile witness in the court?

In this case, the Supreme Court said that merely because the prosecution has chosen to treat his witness as a hostile witness, cannot make the evidence of such witness totally null.

The court said that if the witness proves to be an unfavourable witness, who has failed in proving a fact, then the evidence of such witness can’t be effaced. The court can still rely on and appreciate the statement made by the hostile witness. It can be accepted as evidence to the extent that the statement is found to be credible or authentic and inspires credit.

Atmaram and ors vs. State of M.P

The Supreme Court, in this case, very clearly stated that inconsistency in the statement of the prosecution’s witness case can not make the whole statement invalid. If the judge feels that the character of the witness has not been completely shaken or that his credit is still worthy of trust, then with due care and caution, such statement or evidence may be accepted by the court.

But if the whole of the testimony of hostile witness stands in contradiction to every statement made earlier and is impugned, then such statement can’t be treated as evidence in the court of law. The judge may, in his opinion, discard the evidence in toto.

The Supreme Court said that the court’s time is very precious and if because of any witness the judicial proceedings are affected and subvert, then the court can’t remain silent on such behaviour of witness. The court must make efforts to bring truthfulness in such a witness. Our justice system can’t let such witnesses divert the proceedings from reaching the truth.

If the witness gives testimony under any kind of threat or undue influence, the court must scrutinize it. Only credible and reliable evidence is appreciated in the court of law, not those which are tainted and unworthy of credit. Even section 193 of the Indian Penal Code imposes punishment on the witness for giving false evidence and shall be imprisoned for a term extending up to seven years with fine.

If you are a regular reader, please consider buying the Law PDFs and MCQ Tests. You will love them. You may also support with any amount you like. Thank You.
2020-08-11