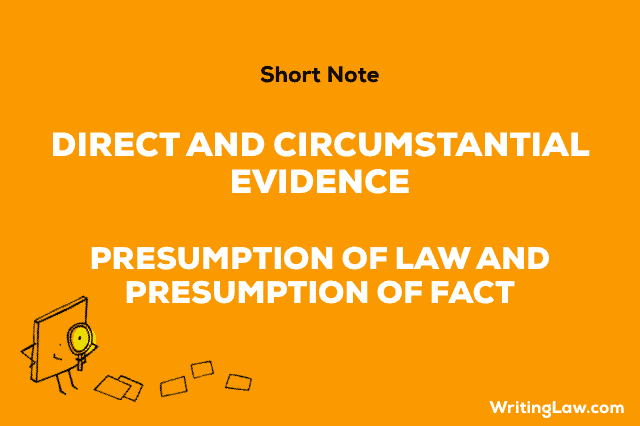 What is Direct Evidence in Law

It means any fact which without the intervention of any other fact proves the existence of a fact in issue.

Example, A is tried for causing grievous hurt to B with a club. C deposes (testifies) to the fact that he saw the accused, inflicting the blow, which caused the grievous hurt. The evidence adduced (mentioned, pointed out, cite as evidence) by C is direct evidence.

What is Circumstantial Evidence

It is that which relates to a series of facts other than fact in issue. This evidence assumes great importance when direct evidence is lacking.

The most fundamental decision on circumstantial evidence is, Hanumant Govind Nargundkar vs. State of MP.

J. Mahajan said that the circumstances should be of a conclusive nature and tendency. They should be such as to exclude every hypothesis, excluding the one proposed to be proved.

Example, A man is presumed innocent until proven guilty.

Irrebuttable presumption can be found in section 82 of IPC wherein it is laid down that ‘nothing is an offence which is done by a child under seven years of age. No evidence will be allowed to be adduced that the accused was guilty’.

Example, A child born in legal wedlock shall be presumed to be legitimate, and the one who questions his legitimacy must disprove it.

They are rebuttable as their evidentiary effect may be negated (invalidated, nullified, cancelled, make ineffective) by contrary proof.