How much information received from accused may be proved? 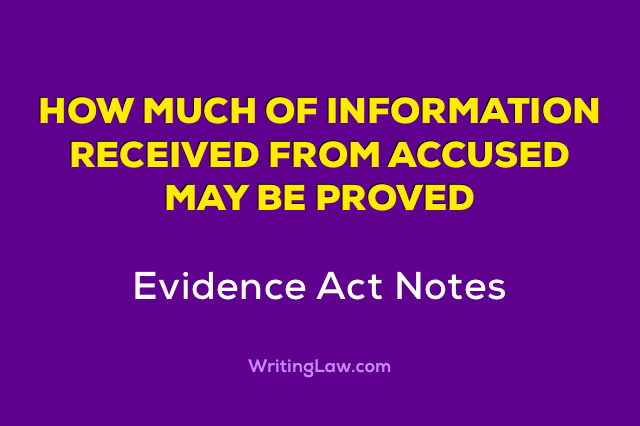 Section 27 of the Indian Evidence Act says that if the discovery of the fact supports the confession of the accused, then it may be presumed to be true and not to be excluded. Section 27 is based on the doctrine of confirmation by subsequent events.

The fact discovered includes:
1. The place from which the object is produced.
2. The knowledge of the accused as to this and the information given must relate distinctly to the fact discovered.

The object of the section is to admit evidence that is relevant to the matter under inquiry. That is, the guilt of the accused, and not to admit the evidence which is irrelevant.

Anter Singh vs State of Rajasthan, 2004

1. It was held that the fact of which evidence is to be given must be relevant to the issue. The relevancy of the fact discovered must be established according to prescriptions relating to relevancy.
2. The fact must have been discovered.
3. The discovery must have been the consequence of the information received.
4. The accused person must be in the custody of a police officer.

Note: Only that information that relates distinctly or strictly to the fact discovered can be proved.

Supreme Court held that for the application of section 27 of the Indian Evidence Act, an admissible portion of the confessional statement has to be found as to a fact which was the immediate cause of the discovery; only that would be part of legal evidence and not the rest.

A statement that was not in the knowledge of police before the disclosure statement of the accused was recorded admissible.

In this case, four persons were charged with murder, and at trial, one of them confessed. The court said that the proper way to approach is first marshal (assemble, gather, collect) the evidence against the accused excluding the confession altogether and consider whether conviction can be safely based on it or not.

WritingLaw » Law Notes » How much information received from accused may be proved?

If you are a regular reader, please consider buying the Law PDFs and MCQ Tests. You will love them. You may also support with any amount you like. Thank You.
2021-04-20