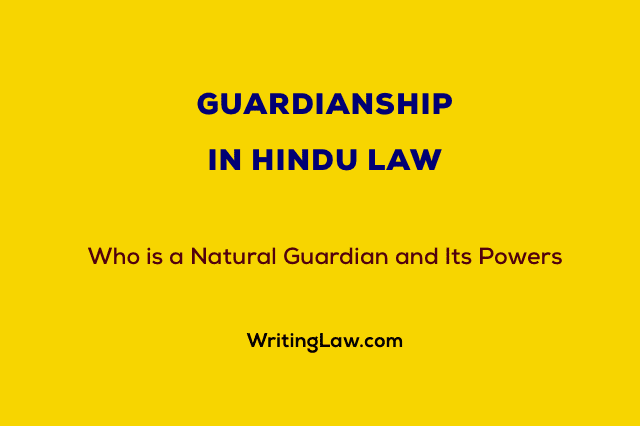 The provisions related to guardianship for Hindus are given under the Hindu Minority and Guardianship Act, 1956. This act provides as to who shall be the guardian, role of a guardian, and so on.

Who is a Natural Guardian

Section 6 of the Hindu Minority and Guardianship Act talks about the natural guardian.

2. The custody of the child who is five years old or has not completed the age of five shall be with the mother.

3. The mother is a natural guardian of the child who is illegitimate, whether a boy or an unmarried girl.

4. The husband is considered to be the natural guardian of a married girl.

5. If the child is adopted son, then the natural guardian is the adoptive father and after him, the adoptive mother.

6. Neither the father nor the mother shall be considered to be the natural guardian of the child if,
a) he or she is no more a Hindu, or
b) he or she has renounced the world and has become an ascetic or sanyasi.
Note: In the above provision, the word father and mother do not include a step-father and a step-mother.

1. The guardian may act and do everything which is necessary for the benefit and in the interest of the minor.

2. The guardian cannot mortgage, charge, gift, sell, or exchange the immovable property of the minor. He can do so only with the permission of the court.

3. The guardian, if required, can lease any part of the property for a period of five years but not beyond that. If the lease to be made exceeds five years, then the permission of the court is required.

4. If the guardian does not follow the rule and disposes of the immovable property, then it shall be voidable at the option of minor or any other person claiming on behalf of the minor.

5. The court shall allow the guardian to transfer or lease the property only when it finds necessary to do so in the interest or advantage of the minor.

Testamentary Guardian and Its Powers

1. The father is the natural guardian of legitimate minor children. He may appoint any person as the guardian for them or of their property or for both, by making a will.

2. The will made by the father shall not operate if the mother of the child is alive. Section 6 clearly says that firstly the father and after him, the mother. The will shall be revived if the mother does not make any other will in concern to their children during her lifetime.

3. The mother of illegitimate children is considered to be the natural guardian of them and not the father. She can appoint any person as their guardian by making a will.

4. After the death of the father or mother, whatever the case may be, the person appointed as the guardian shall act as the natural guardian of children. And he shall have all the rights of a natural guardian subject to restrictions mentioned in the act or the will, if any.

5. The right of the guardian appointed by the will shall cease after the marriage of a girl.

Duraiswamy vs Balasubramanian, 1977: The child’s testamentary guardian cannot sell or transfer any part of the immovable property of a minor without seeking permission from the court.

He may be any person like the uncle or aunt of the child or elder brother or elder sister or anybody who provides necessities to the minor child. The de facto guardian, like the natural guardian, cannot dispose of or alienate the property of a minor child until and unless it is necessary or in the interest of the child. The permission of the court is still required.

The court shall not allow any person to be the child’s guardian if it believes he is not suitable or appropriate for the child. The child’s welfare and well-being are of utmost importance for the court, which cannot be negotiated in any situation.

For example, the custody of a child cannot be given to a mother with an assumption that no one can take care of the child as a mother can. If she has a habit of drinking daily, then she can’t be given custody of a minor child.

The object of the court’s welfare principle is not a test that negates every provision of the act so easily; rather, it is a positive test that determines the welfare of the child above all rules. The court believes that the child’s welfare is of paramount consideration, and it cannot be weighed under tight-packed provisions.

Before announcing to give the custody of the child to the parent, the court must be satisfied with the facts as to what the child desires or wishes and who can give a friendly and cooperative environment to the child for a good upbringing. It is the right of a child under Article 21 of the Constitution to develop his personality and intelligence. And it is possible only in a favorable environment.

If you are a regular reader, please consider buying the Law PDFs and MCQ Tests. You will love them. You may also support with any amount you like. Thank You.
2021-05-18