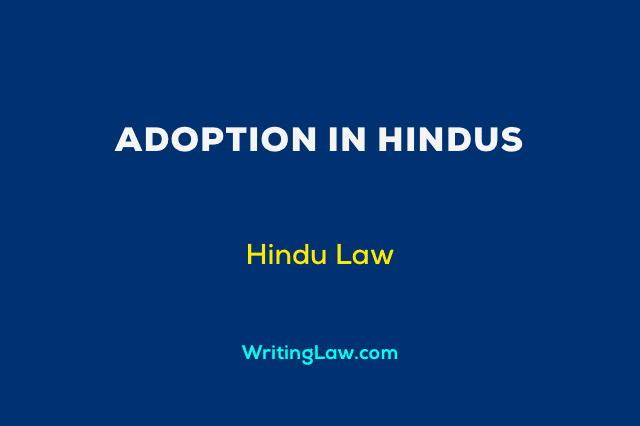 The provisions to regulate adoption in Hindu Law are governed through the Hindu Adoption and Maintenance Act, 1956. This act applies to every person who is Hindu by religion, by birth, or by conversion. Or who is Buddhist, Jain, Sikh by religion.

Object of Adoption in Hindu Law

There are two objects as to why adoption is done-

1. To secure one’s funeral rights. Under Hindu Law, it is the son who performs the last rites of a person.

2. To preserve one’s lineage and carry forward the family usages.

Essentials of a Valid Adoption in Hindu Law

1. The person who wants to adopt must be capable of adopting.

2. The person who is giving a child in adoption must be capable of giving.

3. The person who is being adopted in adoption must be capable of being taken in adoption.

Capacity of Male Hindu to Take in Adoption

1. Any male who is Hindu can adopt a son or daughter if he is of sound mind and a major.

2. At the time of adoption, if the Male Hindu is married and wife is alive, then the consent of wife is necessary for adoption.

If the wife has renounced the world, or is no more a Hindu or has become of unsound mind, then the consent of wife is not required.

3. If there are more than one wife, then the Male Hindu has to take consent of all wives.

Capacity of Female Hindu to Take in Adoption

1. Any female Hindu can adopt a son or daughter if she is major and of sound mind.

2. At the time of adoption, if the female Hindu is married and her husband is alive, she has to take his consent for adoption.

If the husband has renounced the world or is no more a Hindu or has become unsound mind, then consent is not required.

Who are Capable to Give in Adoption

1. Only the father or mother or guardian of a child can give the child in adoption.

2. Both parents have equal rights to give their child in adoption. But if either of the parents renounces the world, or is no more a Hindu or becomes of unsound mind, then the consent of that parent is not required.

3. If both the parents are dead or have renounced the world or have abandoned the child or declared of unsound mind by court. Then with the permission of court, the guardian can give the child in adoption.

4. Before granting permission to the guardian for giving child in adoption, the court must be satisfied that the adoption is for the well being of the child and his/her welfare.

Who May be Adopted According to Hindu Law

1. The person to be adopted must be Hindu.

2. The person should not have been adopted earlier by other family or parent.

3. The person to be adopted should not be married unless there is any old custom that allows parties to take such person in adoption.

4. The person to be adopted must not be above 15 years of age unless any custom allows parties to take in adoption of a child above the age of 15.

Other Conditions for Valid Adoption in Hindu Law

1. If the child to be taken in adoption is son, then the adoptive parents must not have their own son, grandson, or great-grandson living (whether by blood or adoption).

2. If the child to be taken in adoption is daughter, then the adoptive parents must not have their own daughter or granddaughter living (by blood or adoption) at the time of adoption.

3. If a Male Hindu is adopting a female child, then there should be an age gap of at least 21 years between them.

4. If a female Hindu is adopting a male child, then there should be an age gap of 21 years between them.

6. The adoption is made to give child a family where he or she can grow in a safe environment. The parents taking child in adoption must actually take the child with them for his caretaking. After adoption, the family of adoptive child changes.

Effects of Adoption in Hindu Law

Once an adoption always an adoption. The adoption shall be deemed to take effect from the date of making adoption. After that, the rights of the child changes from existing family to adopting family.

But the adoptive child cannot marry any such person with whom he could not marry if he would have been living in his previous family.

If any property vests in the adoptive child, it shall remain with him irrespective of the fact that he is no more a part of the previous family.

The adopted child shall not affect the rights of any person in an estate which is vested in him before adoption.

If you are a regular reader, please consider buying the Law PDFs and MCQ Tests. You will love them. You may also support with any amount you like. Thank You.
2020-08-10