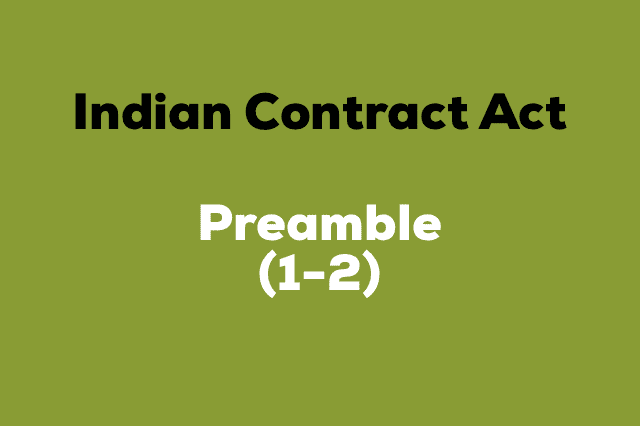 Whereas it is expedient to define and amend certain parts of the law relating to contract;
it is hereby enacted as follows:

This Act may be called be the Indian Contract Act, 1872.

Enactment repealed:
Saving– Nothing herein contained shall affect the provisions of any Statute, Act or Regulation not hereby expressly repealed, nor any usage or customs of trade, nor any incident of any contract, not inconsistent with the provisions of this Act.

In this Act the following words and expressions are used in the following senses, unless contrary intention appears from the context:

(a) When one person signifies to another his willingness to do or to abstain from doing anything, with a view to obtaining the assent of that other to such act or abstinence, he is said to make a proposal;

(e) Every promise and every set of promises, forming the consideration for each other, is an agreement;

(g) An agreement not enforceable by law is said to be void;

(h) An agreement enforceable by law is a contract;

Next,
CHAPTER I (3-9) – COMMUNICATION, ACCEPTANCE AND REVOCATION OF PROPOSALS