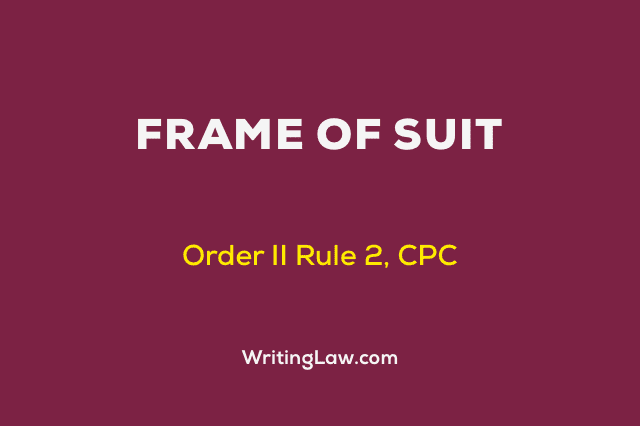 Order II of the Civil Procedure Code deals with the framing of suit. It lays down the rules as to how a suit should be framed.

While drafting a plaint, the plaintiff must draft his plaint in such a way that includes all the important assertions and the claims that the plaintiff wishes to put before the court. Nothing important should be left for inclusion in the plaint.

It is the plaint of the plaintiff which speaks in court before a judge. The plaint should be such which can take a case towards the conclusion for a final decision. All the subject matter in dispute must be decided at once.

The plaintiff in his plaint must include the whole of the claim, which he wishes to seek from the court. For the purpose of bringing the suit within the jurisdiction of any court, the plaintiff may relinquish or abandon any part of his claim.

With reference to example 1 mentioned above: The claim which the plaintiff relinquished in order to bring the suit within the pecuniary jurisdiction of Delhi district court, can’t be raised subsequently in a different suit. If the plaintiff has omitted or intentionally relinquished his portion of the claim, then he can’t sue for it afterwards.

Omission to Sue For One of Several Reliefs

If the plaintiff is entitled to more than one relief for the same cause of action, he must sue for all such reliefs. If he omits to sue for any one of several reliefs, then he can’t bring another suit for claiming such relief.

Exception to the Above Rule

Mohd. Khaleel Khan vs. Mohd. Mia Ali, 1949: Privy Council held that if the relief claimed in a new suit is based upon the same cause of action as of former suit, then it shall attract the bar under Order II Rule 2. If the relief claimed is distinct from the former cause of action, then it will not be barred under Order II Rule 2 of the Civil Procedure Code.

The object behind Order II Rule 2 is to prevent the multiplicity of cases. Already the court is burdened with lakhs of cases. The purpose behind this rule is that defendant should not be put in trouble twice for the same cause of action. The matter should be decided at once on merits. Multiple claims raise confusion and destroy the precious time of the court. Hence, the significance of Order II Rule 2 is appreciated in the framing of a suit.

If you are a regular reader, please consider buying the Law PDFs and MCQ Tests. You will love them. You may also support with any amount you like. Thank You.
2020-05-12