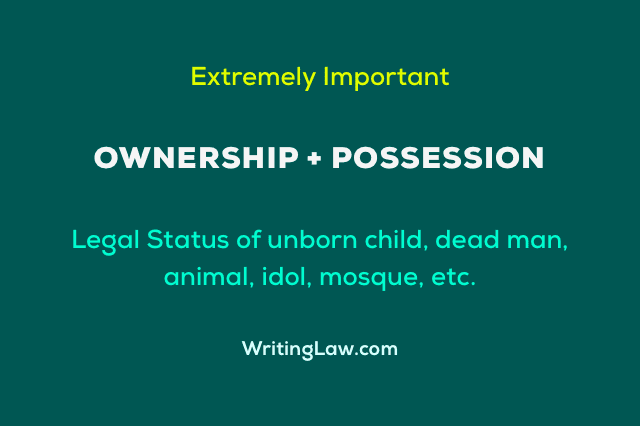 From the above definition, we find three elements:-
1. Indefinite user.
2. Unrestricted disposition (dispose off).
3. Unlimited duration.

According to Salmond, Ownership, in its most comprehensive significations, denotes the relation between a person and right that is vested in him.

1. Right of user
2. Possession which also includes eliminating others from that thing.
3. Right of transfer.
4. Disposition as he wishes.

According to Salmond, Ownership can be acquired in two ways:-
1. By operation of law.
2. By reason of some act or event.

Consists of material objects like land, immovable or movable properties, etc. The wealth and assets of a person like interest in the land, debts, share in the company, patents, goodwill, copyrights, etc. may also be the subject matter of ownership.

Vested Ownership → title of the owner is already perfect.
Contingent Ownership → While in this, the title is imperfect but is capable of becoming perfect on the fulfillment of some conditions.

Absolute Ownership → all the rights like possession, enjoyment, and disposal are vested in a person without any restriction.
Limited Ownership → But when there are restrictions about disposal or use and enjoyment.

For example-
Before the Hindu Succession Act, 1956, the woman had only limited ownership over the estate because she held the property only for her lifetime, and after her death, the property passed on to the heirs last holder of the property.

Legal ownership has its origin in the rules of common law, and equitable ownership is that which emanated (emanated- spread out from a source) from rules of equity.

Possession is the prima facie evidence of ownership. It has nine points in law. One who possesses a thing can be the owner of the same, but it is not so in every case.

For example, I might hold a pen. I may be possessing it, but I may not be the owner of that pen. But I may appear to be the owner in the eyes of people who are looking at me holding the pen, except for the real owner. So in this sense, we can say that a possessor is the owner for the whole world except the real owner.

Constructive Possession means having power and intention of retaining control over the property but without actual control or actual presence over it.

Adverse possession means possession by a person initially holding the land on behalf of some other person and subsequently setting up his claim as a true owner of the land.

Bridges vs. Hawkeworth, 1851: The court held that the hundred rupees note found on the floor of a shop passed into the possession of the finder rather than the shopkeeper. The decision has been supported by Paullock and Salmond. 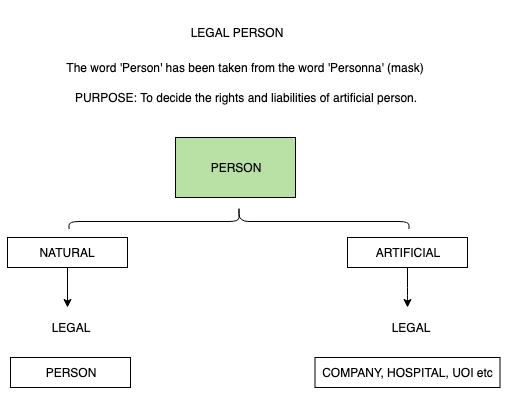 Definition of a Legal Person

Salmond- A person as any being to whom the law regards as capable of rights or duties. Any being that is so capable is a person, whether human being or not, is a legal person.

Paton- Legal personality is a medium through which some such units are created in whom rights can be vested.

For example-
A gift may be made to a child who is unborn. Although the rights conferred on unborn are contingent (conditional, resting, dependent upon) because it depends on his taking birth alive.

Salmond says that the personality of human being starts with birth and ceases with his death. Therefore dead men are no legal person in the eyes of the law. Even then, the law protects the body of a dead man, reputation, and property.

Ashray Adhikan Abhiyan vs. UOI, 2002: Supreme Court held that even a homeless person, when found dead on the road, has the right of cremation as per his religious faith.

Law does not recognise an animal as a legal person because they are only a thing and have no natural or legal rights.

Salmond says, animals are only objects of legal rights and duties but never the subject of them.

Recently in Karnail Singh vs. State of Haryana, 2019, Court held that from now, all animals would be considered as “persons,” which is a juristic entity. Even the state of Uttarakhand has recently recognized animals as persons.

It has been judicially recognised that an idol is a legal person; it can hold the property, but the position of an idol is like a minor because the priest acts as a guardian to look after the interest of the idol.

The PC in historic case Pramatha Math Mullick vs. Pratyuman Kr Mullick held that an idol is a legal person, and the next friend represents it.

Yogendra Nath Naskar vs. Commissioner of Income Tax, 1969: Supreme Court held that an idol is a juristic person capable of holding property and of being taxed through its Shebait, who is entrusted with the possession and management of its property. An idol can be treated as a unit of assessment for assessing its liability under the Income Tax Act.

Shebait: Shebait is that person who serves the deity in the temple.

In the case of Maula Bux vs. Hafizuddin Lahor, 1925, the court held that a mosque is a legal person, and can sue and can be sued. But the privy council in the case of Masjid Shahid Ganj Case, 1940 held that the mosque is not an artificial person in the eyes of the law, so no suit can be brought by a mosque or against a mosque.

Supreme Court in Siromani Gurudwara Prabandhak Committee vs. Somnath Das, 2000 held that Guru Granth Sahib, the holy Granth of Sikh, is a legal person. Court further made it clear that Guru Granth Sahib stands on a different footing than the holy books of other religions like Gita, Ramayan, Bible, Quran, etc.

Corporate personality is a creation of law. A corporation is an artificial person enjoying in law, a capacity to have rights and duties, and holding properties.

If you are a regular reader, please consider buying the Law PDFs and MCQ Tests. You will love them. You may also support with any amount you like. Thank You.
2020-08-12