Protection of Minorities in the Constitution 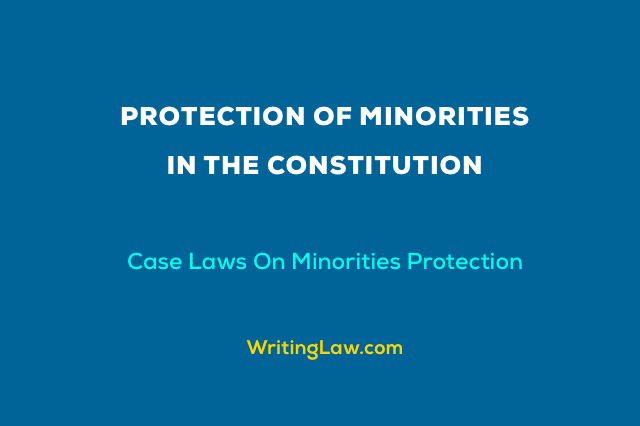 The exact definition for who are minorities is not clearly provided in the Constitution. Article 29 protects the interests of India’s minorities but does not contain any specific description.

The term minority simply refers to the class of people who are different from other sections of society in terms of language, script, religion, culture, and so on. They are less in number in the overall population; that is why there are referred to as minorities.

The Indian Constitution protects and safeguards the rights and interests of minorities as well. The minorities may be less in number, but they are also the citizens of the country. And they must possess all rights which a majoritarian possess.

Protection and Safeguard of Minorities

Article 29 of the Constitution protects that class of citizens who have different cultures, languages, or scripts. It protects the cultural rights of minorities.

The minorities who have different cultures have the right to preserve the same. No educational institution can refuse to admit any student of culture or domain based on religion, caste, language, or race.

Article 30 of the Constitution gives the religious and linguistic minorities the right to establish educational institutions of their choice.

But the right given to minorities under Article 30(1) is not absolute. Some educational institutions are aided by the government and some not. The admission to the unaided schools does not concern a state. The state only prescribes qualifications and standards a school needs to maintain.

The law of Article 30(1) always needs to be read with Article 29(2). The institutions cannot deny admission to any student. But, to some extent, they may notify the criteria for non-minority and minority students.

Any minority institution may have its own procedures for the process of admission. It is advised that the entrance should be based on merit. But if the state aids the institution, then the state can put some necessary restrictions in order to run a proper administration. The aided institutions cannot enjoy the same monotonous powers which a private institution possesses. The state may frame regulations.

The Supreme Court declared that the state cannot make reservations for the appointment of SC/ST teachers in minority schools or institutions. The institution may itself decide for the selection of its staff members as it deems fit for the institution.

The Supreme Court, in this case, very diligently opined that in the interest of the nation and of all, the state can make regulations for a minority institution. If the state makes any law in the national interest, then it shall apply to all institutions regardless of the fact that whether it is an unaided school or aided school.

As said earlier in Pai’s case, the law under Article 30(1) is not absolute and above the law. The state can make reasonable regulations for efficient administration and in the appointment of teachers. But the law made by the state shall be made carefully, keeping in mind the national interest as well as the interests and the rights of minorities.

Article 350A of the Constitution gives protection to linguistic minorities. It provides that the state must ensure and provide appropriate instructions to the schools that the students in the primary level who belong to linguistic minority groups must be taught in their mother tongue. This is so that they can gain profound knowledge of basic subjects at the primary level of learning. The President of India may also direct any state to do such for the protection of interests of the minorities.

The committee was formed in 2005 to study and analyse the social and economic status of Muslims in India. It came up with a few significant recommendations:

1. The committee suggested constituting commissions in public bodies so that there shall be an organ for listening to the grievances of minorities.

2. There must be a mechanism to promote Muslims’ participation in employment and public profiles like IAS, IPS, and other public figures.

3. To establish a National Data Bank, which will keep a record of the progress of the various minority groups.

4. To make a mechanism that shall link madarsas with the higher secondary schools. So that the children studying in the madarsas avail higher education in point of time.

Every year 18th of December is celebrated as Minorities Rights Day. For the protection of the interest of minorities, the government has formed the National Commission for Minorities – whose work shall be to ensure the minorities’ rights in India. It is said that a society is civilised when the rights of the minorities are protected.

WritingLaw » Law Notes » Protection of Minorities in the Constitution

If you are a regular reader, please consider buying the Law PDFs and MCQ Tests. You will love them. You may also support us with any amount you like. Thank You.
Explore WritingLaw's Homepage
2021-03-03