Example and Punishment for Cannibalism 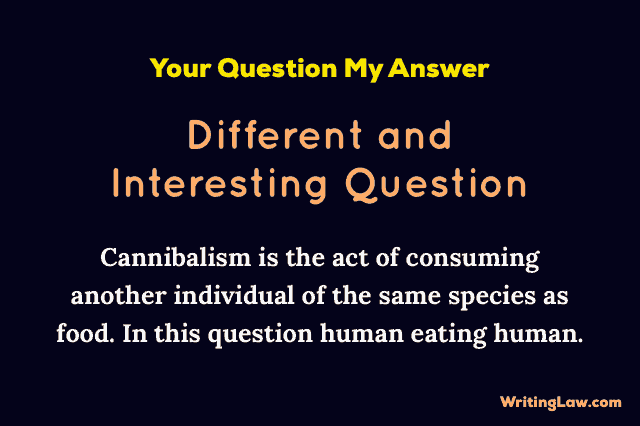 Question asked by a first-year law student-
A whole crew is on a boat traveling somewhere in the Atlantic Ocean, and accidentally a disaster took place. All the crew members died, and only four members were left alive. Those four named were A, B, C, and D. Also, out of those four members, one is of the unconscious mind.

There is nothing to eat, so they said that we will do the act of cannibalism but while speaking the word ‘cannibalism’ D was in an unconscious mind.

Cannibalism is the act of consuming another individual of the same species as food. In this question, humans eating a human.

So they tossed a coin after taking consent from each other. They included even the unconscious D too. They decided that whose name will come first, he has to die, and then they tossed the coin. When the name came, it was of D, but at that time, D comes in a conscious mind, and he said that I withdraw. So A and B decided to kill D, and they instigate C also, but C refused, and so they (A & B) kill D. But when they start sharing D’s body as a meal, C also joined them.

What is the Punishment For Cannibalism

The Doctrine of Necessity – When to be Invoked

Wow. This is a great question. All will be punished. That is for sure. I will consult this question with one of my other colleagues and reply in the evening or tomorrow. Is that okay? It is an excellent question, by the way. Replied the next day-

As far as liability of A, B, C, and D are concerned; All are liable for the murder of D.

Here when the conspiracy was committed, at that time, D was of unsound mind, and hence his liability ceases.

A, B and C, all three are liable for murder as well as of criminal conspiracy under Section 120B of IPC. They can not take defence under Section 81 as the doctrine of necessity says, smaller harm can be caused to avoid big harm. But this is not so in this case. It is purely a murder.

Each individual life was equivalent to that of another. You may refer to the case of R vs. Dudley and Stephens, 1884, in which it clearly says that necessity is not a defense to a charge of murder.

Further-
The doctrine of necessity must be carefully dealt with, else need would open the door to many excuses. It was, for this reason, it was not admitted in the case of Dudley and Stephens. They were held guilty of murder.

Similarly, if a man who is starving enters a house and takes food in order to keep himself alive, the law does not admit the defence of necessity. It holds him guilty of theft. The reason is that if hunger were once allowed to be an excuse for stealing, it would open a way through which all kinds of disorder can be claimed to be allowed. So the courts must for the sake of law and order take a firm stand.

Read Next: Punishment Under IPC, 1860