6 Kinds of Punishment Under the Indian Penal Code 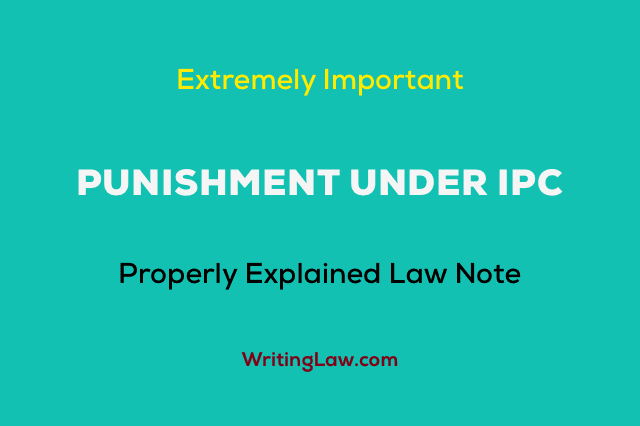 Under the law, punishment is provided to cease the wrongdoer from committing the crime again. Punishment is a consequence or result of a wrong committed by a person. Provisions for punishment are provided under section 53 and Chapter III of the Indian Penal Code (IPC).

The section defines various kinds of punishments to which the offenders are liable under the Indian Penal Code. The punishments given under section 53 apply only to offences given under this Code.

The court has the power to reduce the quantum of punishment after considering various aspects of the case and the mitigating circumstances, if any.

In India, the reformative theory is followed to provide punishment. The punishment awarded should neither be so harsh nor so easy that it fails to serve its purpose of generating an impact on the offender and as an eye-opener for others. It is considered that punishment should be of such a nature that it brings reform in a person’s personality and thinking.

The punishments to which offenders are liable under the provisions of this Code are:

As per section 53 of the Indian Penal Code, there are five types of punishments that a court may provide to a person convicted of a crime. These are death, imprisonment for life, simple and rigorous imprisonment, forfeiture of property and fine. And section 73 provides for another type of punishment, that is solitary confinement. Let us learn about all these in detail.

Punishment of death is also known as capital punishment. Under this punishment, a person is hanged till he dies.

Earlier, for the offence provided under section 303, i.e., murder by life convict, capital punishment was compulsory. In Mithu vs the State of Punjab, the death penalty was held unconstitutional for being violative of Articles 14 and 21 of the Constitution.

The Supreme Court in Bachan Singh vs the State of Punjab upheld the validity of the death penalty, but the court restricted the provision of the death penalty to the rarest of rare cases only. If the case falls under this theory, then capital punishment may be given.

The court did not elaborate as to what falls under the category. Still, the court has declared from time to time that the cases like honour killings, assassination, genocide, brutal murder, etc., fall under the definition of ‘rarest of the rare case’.

As per section 54 of the Indian Penal Code, the appropriate government can commute the sentence of death for any other punishment provided by this Code.

The words “imprisonment for life” was substituted for “transportation for life” by Act XXVI of 1955.

In this type of punishment, an accused convicted of a crime has to remain in prison until he is alive or until pardoned or otherwise commuted to a fixed period.

Note: What is the reason behind 14 years of imprisonment?

Must See: Is Life Imprisonment for the Rest of the Life or 20 Years or 14 Years?

Imprisonment means taking away a person’s freedom and putting him in prison. According to section 53 of the IPC, there are two kinds of imprisonment:

Forfeiture implies the loss of property of the accused. Under this punishment, the State seizes the property of a criminal. It is the result of the wrong or default caused by the person. The property forfeited may be movable or immovable.

Forfeiture of property as punishment is provided for the offences given under section 126 (committing depredation on territories of power at peace with the Government of India) and section 127 (receiving property taken by war or depredation mentioned in sections 125 and 126).

It is defined under section 73 of the IPC. Solitary confinement means keeping the prisoner isolated and away from any kind of intercourse with the outside world. It is believed that a feeling of loneliness may exert a wholesome (good) influence and reform the criminal. Solitary confinement shall in no case exceed three months in total. The scale, as given in section 73, is as follows:

It can only be awarded if the following two conditions exist:

In this case, the Supreme Court observed that solitary confinement means the harsh isolation of a prisoner from the society of fellow prisoners by cellular detention. It should be imposed following a fair procedure and only in exceptional cases.

If you are a regular reader, please consider buying the Law PDFs and MCQ Tests. You will love them. You may also support us with any amount you like. Thank You.
2023-01-17