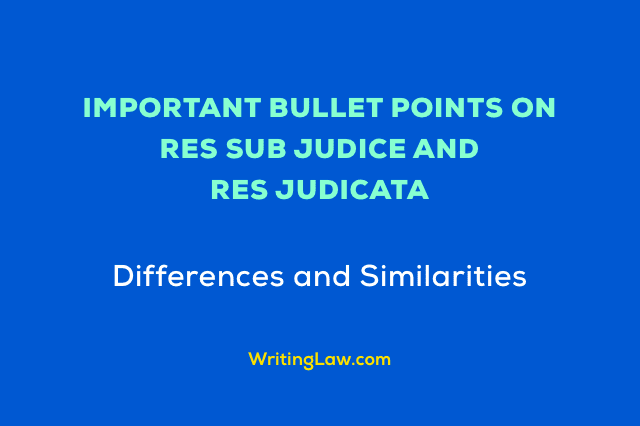 Res Judicata, which is primarily based on three maxims and Res Sub Judice, cause a lot of confusion to new law students. This is mostly because they sound so alike. These two terms of CPC are important for various exams. Hence, it is essential that you understand the key differences and similarities between Res Judicata and Res Sub Judice.

(1) In the case of Res Sub Judice, there must be two suits, one of which should be previously instituted.

In Res Judicata the motive is that ‘there must be an end to litigation.ʼ Thus, there is a bar on trial that has already been adjudicated. In simpler terms, a matter that has previously been decided is not put to trial again. This saves the precious time of our already overburdened and resource-less courts.

(2) The doctrine of Res Sub Judice is contained in section 10 of the Civil Procedure Code, which provides when and how it can apply.

The doctrine of Res Judicata is contained in section 11 of the Civil Procedure Code, including eight explanations that provide when and how it can be applied.

(3) Res Sub Judice prohibits proceedings of two parallel suits between the same parties. This means that if two competent courts try the same suit on the same issue, the subsequent court can put stay on the trial to prevent the multiplicity of proceedings and time of the court.

On the other hand, Res Judicata prohibits the second trial of the same dispute between the same parties.

(4) In the case of Res Sub Judice, the previously instituted suit must be pending in the same court or any competent court having jurisdiction.

In the case of Res Judicata, the previously instituted suit must be decided by the competent court in which the issue has been raised subsequently.

(5) In the case of Res Sub Judice, it applies to only suit, including appeal.

In the case of Res Judicata, it applies to suit and applications.

(6) In the case of Res Sub Judice, the matter in issue in both the suits must be substantially the same. It means the issue in the subsequent suit must have been directly and substantially in question in the former suit either actually or constructively.

The same is in the case of Res Judicata.

(7) In the case of Res Sub Judice, both the suits must be between the same parties or the representatives of these parties litigating under the same title.

The same is in the case of Res Judicata.

Can Police Officer be an Informant in a Case

Statement of Eye Witness or Opinion of Doctor? What Matters More in a Rape Case

Different Duties of an Advocate