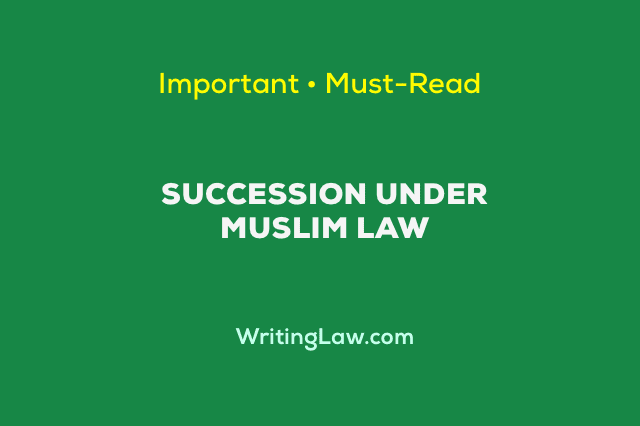 Succession under Muslim Law is the transfer of the property on the person’s death to the rightful heir. When a Muslim person dies, all of his property can be passed on to his heirs regardless of whether he acquired it himself or received it from the ancestors.

2. The heirs under Muslim Law do not get any right by birth, whatever be the nature of the property. The right of inheritance arises at the death of the ancestor.

3. The heirs can only claim their share of what is left, that is, after appropriations like debt, valid legacies, and statutory liabilities have been made out.

4. Muslim Law makes no distinction between the rights of men and women. A female, as well as a male, can become legal heir of property on the death of the ancestor.

5. Under Muslim Law, a widow is not excluded from inheritance. A Muslim widow with no children is entitled to a quarter of the deceased husband’s property after covering his funeral expenses and debt.

6. A person who was not conceived before the death of the propositus cannot be an heir. However, a child who is then in its mother’s womb can inherit if it is born alive. Propositus means the person from whom a line of descent is traced.

7. When a deceased Muslim has no heir, his property is inherited by the government under the process of escheat.

8. Step relations have got no mutual right of succession or inheritance.

Heirs under Muslim Law can be classified into the following categories:

If the sharers and the residuary are not present, the property will then devolve upon the distant kindred (one’s family and relations). They are the uterine heirs (persons descended from common mother but by different husbands).

Generally, the property of the deceased equals the total shares of heirs. There may be cases when the property to be distributed is less than the shares specified as per Quranic distribution of property. When the total number of shares exceeds one, each person’s share is reduced by making a common denominator. Then the denominator is increased to total shares and then allotted as per the new denominator.

For instance, a female Muslim dies surviving her husband and two full sisters, as shown in the table below: 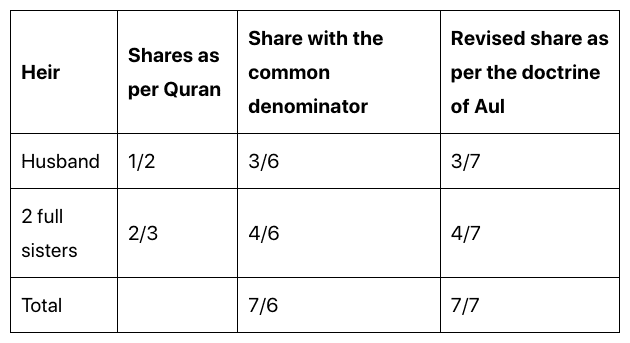 Generally, the property of the deceased person equals the total shares of the heirs. But in certain cases, the property available is more than the shares specified as per Quranic distribution of property, and there are no residuary. The surplus is not given to distant kindred but is returned to the sharers.

For instance, a male Muslim dies surviving mother and a daughter and no residuary, as illustrated in the table below:

Succession under Muslim Law purely ensures compliance with the Quranic traditions. The succession rules promote a conflict-free succession of property at the ancestor’s death or by prescribing defined rights for heirs/individuals. It is stated in Holy Quran that:

From what is left by parents and those nearest related there is a share for men and a share for women, whether the property be small or large, a determinate share.

This article is written by Nupur. She recently completed LLB from Dehradun. She is creative and loves reading.
2021-06-30