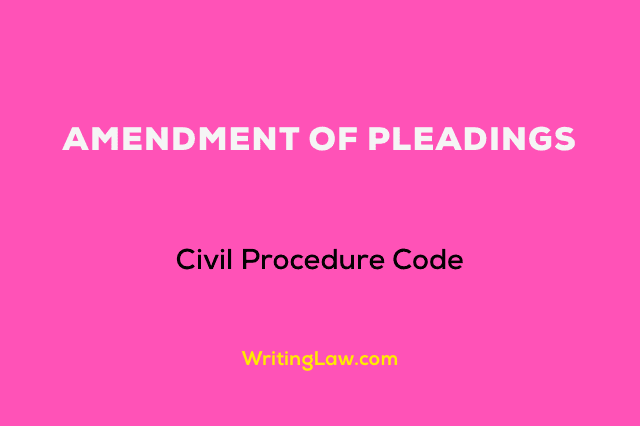 Order VI, Rule 17 of the Civil Procedure Code talks about amendment of pleadings.

At any stage of proceedings, the court may allow the plaintiff or defendant to amend his pleadings. The amendment to pleadings shall be made necessary if it determines the real questions in controversy among parties.

Proviso: But if the trial has commenced, then application for amendment shall not be allowed unless the court concludes that in spite of due diligence, the matter could not have been raised before.

The 2002 amendment inserted the phrase ‘at any stage.’ It means ‘prior to trial.‘

The party who desires to make an amendment to its pleading must raise the matter before the trial commences. After trial, the court shall not allow the party to amend unless the party qualifies the condition of due diligence laid down in proviso.

What is Due Diligence in Making Amendment

What Amendments are Necessary

All amendments are necessary, which determines the real questions in controversy between the parties. A court before allowing amendment must consider the following points:

1. The court must examine the issue of whether it is in the interest of justice or not.

2. Before allowing the amendment, a court must be satisfied with the fact that amendment is necessary for determining the real questions in controversy.

3. If the matter raised for amendment prevents multiplicity of suits, the court may allow it.

4. The court must be satisfied that the party seeking amendment has exercised due diligence, and the applicant is not mala fide (bad intention).

When Court Shall Not Allow Amendment of Pleading

1. If allowing the amendment causes injustice to the other party, then it shall not be permitted. or,

2. If the amendment proposed in pleading entirely changes the nature of a suit, it shall not be allowed. or,

3. If the application for amendment in pleading is made mala fide, it shall not be allowed.

Finally: The amendments made under Order VI, Rule 17, are voluntary amendments for ratifying one’s own error or default.