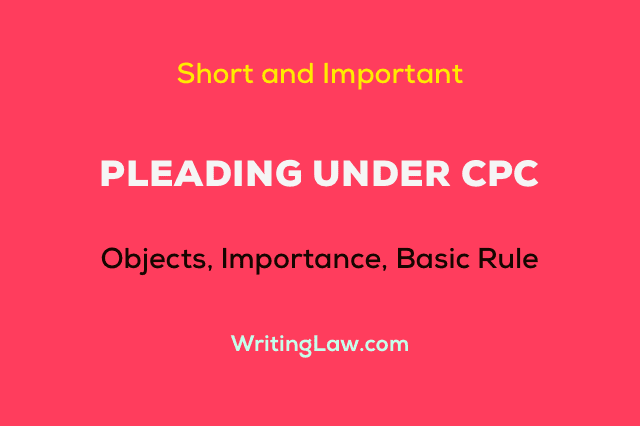 Pleading is the foundation of litigation. Pleading has been dealt with in Order 6 of the Civil Procedure Code. Order 6 Rule 1 of CPC defines pleadings as plaint or written statement.

The word ‘plaint’ is undefined in the code. However, it can be said to be the statement of claim – a document that contains the material fact by the presentation of which a suit is instituted in the court of law.

The word ‘written statement’ has also not been defined in the code. In ‘Food Corporation of India vs Yadav engineer and contractor‘, it has been defined as a term of specific connotation ordinarily signifying a reply to the plaint filed by the plaintiff.

According to Cornell Law School, The pleading is the beginning stage of the lawsuit in which parties formally submit their claims and defences.

Here are four objectives of pleading:

In ‘Virendra Kashinath vs Vinayak N. Joshi‘, the Supreme Court stated, “the object of the rule is twofold: First is to afford the other side intimidation regarding the particular facts of his case so that they may be met by the other side. Second is to enable the court to determine what is really the issue between the parties.”

The fate of the suit lies on the pleading as;

Basic rules of pleadings are given in Order 6 Rule 2 of the Civil Procedure Code, 1908. They are as follows:

Let us learn more about these four points in detail.

1. Pleading should state the facts.

The first rule of pleading states that the pleading should state the facts and only facts and not the law. Question of fact must be pleaded, i.e. the existence of any custom or usage, intention, waiver or negligence must be pleaded.

2. The fact should be material facts.

The second rule of pleading is that the facts stated should be material facts only and not the particulars. Material facts are the basic facts.

In ‘Virendra Nath vs Satpal Singh‘, the Supreme Court stated, “the phrase ‘material’ fact may be said to be those facts upon which a party relies for his claim or defence. In other words, ‘material facts’ are facts upon which the plaintiff’s cause of action or the defendant’s defence defends.” Whether a fact is a material fact or not differs from case to case and depends on the circumstances of the case.

3. Pleading should not state the evidence

4. The facts stated in the pleading should be in a concise form.

Other rules of Pleading

Other rules of pleadings have been given under Rule 4 to 18 of Order 6 of CPC:

This article is written by Nupur. She recently completed LLB from Dehradun. She is creative and loves reading.
WritingLaw » Law Notes » Pleading under CPC: Easy Definition, Object, Importance, and Basic Rules