Composition and Functions of the Finance Commission 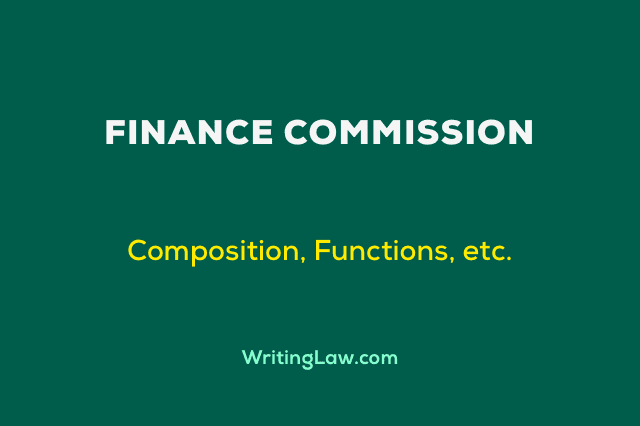 Historically there was a provision that within two years after the commencement of the Constitution, the Finance Commission must get established and after that every five years.

Qualification of Members of Finance Commission

1. The chairman of the Finance Commission must be a person having experience in public affairs.

2. Four other members of the Finance Commission should be selected from the following-
I. A person should be a judge of a high court or qualified to be appointed as one.
II. A person who possesses specialised knowledge of finance and accounts of the government.
III. A person who has extensive experience in administration and financial matters.
IV. A person who is specialized in the field of economics.

1. The distribution of net proceeds of taxes to be shared and allocated between the centre and the states.

2. The rules for the centre that govern the grants and aid to the states by the centre. The amount which centre allocates from the consolidated fund of India.

3. To make a proper course of action for increasing consolidated funds of the state. This will enhance the resources of the panchayat and other local bodies for their smooth functioning.

4. To give advice on such financial matters which the president refers to it.

5. The Finance Commission submits its report to the president of India, and the president lays down it before both the houses of parliament that is Rajya Sabha and Lok Sabha.

Note: Finance Commission strengthens the federal structure in a way that centre and state work in harmony and cooperation. This is a real example of cooperative federalism.

As per the recommendation of the 14th Finance Commission, 42% of the total share of the union’s tax will be given to states. This 42% is allocated to states as per their population, land area, and forest cover. The base year for calculating population criteria is 2011. Earlier it was the year 1971.

1. Finance Commission is a recommendatory body. It gives advice to the president. The president then considers the recommendation for making a decision in financial matters.

2. The president is not bound for the advice made by the commission. President may either accept or deny them.

3. The report given by the Finance Commission to the president cannot be challenged in court. It is not under the ambit of judicial review.

Note: The parliament by law confers power to the Finance Commission for working and procedure. It prescribes the functions to be performed by the commission.

Note: The financial relationship between the centre and the state is given in Part XII of the Constitution of India.

WritingLaw » Law Notes » Composition and Functions of the Finance Commission