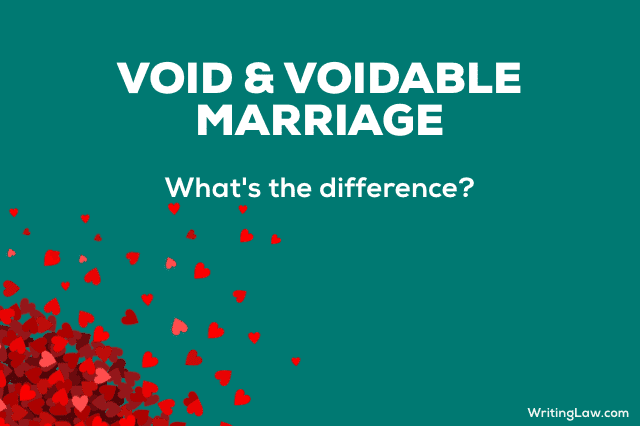 What is Void Marriage

A void marriage is no marriage. It is a marriage that does not exist from its beginning. This is given under Section 11 of the Hindu Marriage Act, 1955.

It is termed as marriage because two persons undergo the ceremonies of marriage, but due to some incompetency, it is void.

Grounds of a Void Marriage

The other two cases in which marriage is void.
1. If proper ceremonies of marriage have not been performed.
2. If a marriage has been performed in violation of the requirement of Section 15 of the Hindu Marriage Act. (Divorced persons when may marry again.)

What is Voidable Marriage

A voidable marriage is a perfectly valid marriage, so long it is not avoided. It can be avoided only on the petition of one of the parties. This is given under Section 12 of the Hindu Marriage Act, 1955.

For Example:
Suppose the husband is impotent and thus can not consummate the marriage. Now, if the wife wants, she can continue being his wife and keep the marriage alive. It will just be like any other regular marriage. But if she likes, she can avoid the marriage and file a petition in a competent court for cancellation of marriage or to declare it as a void marriage.

Grounds of a Voidable Marriage

1. Marriage not consummated due to the impotency of the respondent.
2. Respondent is suffering from a mental disorder as to be unfit for marriage and procreation of children.
3. The consent of the petitioner has been taken by fraud or force.
4. That the respondent was pregnant by some other person other than the petitioner.

Note: The ground is the pre-marriage pregnancy of the wife and not her unchastity. (relating to or engaging in sexual activity, especially of an illicit or extramarital nature)

Note: The children born out of the void and voidable marriages are legitimate, and in no case status of the child can be questioned. (Section 16 of the Hindu Marriage Act)