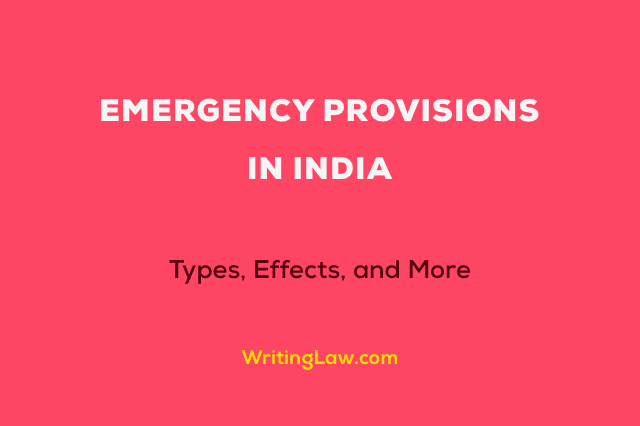 The provisions related to emergency are given in Part XVIII of the Indian Constitution. Article 352 to Article 360 deal with the emergency provisions.

An emergency is imposed in the country or a state when law and order go out of control. Further, to protect the country’s unity, sovereignty, and brotherhood, an emergency may be imposed in difficult times.

There are three kinds of emergency:-

What is National Emergency

The President may impose national emergency in the whole of the territory of India or even in any particular territory or state as well. This power was given to the President by the 42nd amendment in 1976.

In India national emergency has been imposed three times:-

By the 44th amendment in 1978, the word ‘internal disturbance’ has been replaced by ‘armed rebellion.’

Before imposing national emergency in the country, it must be approved by both the houses of parliament. After the 44th amendment 1978, The cabinet gives a proposal of emergency in writing to the President. The time duration given for approval is one month.

If both the houses of parliament approve the proposal of an emergency, then it is imposed for a period of six months. And this time period can be extended observing the situation in the country. It can be extended after every six months. There is no maximum period or limitation prescribed for the continuation of national emergency. It can be continued for any period of time.

The emergency in a country affects people on a large scale. The sufferance can not be described in words. It affects the system as a whole.

Some effects of National Emergency are:-

1. The federal structure of the country shifts to the unitary structure. All the powers get vested in the union government.

2. States come under the direct control of centre.

3. The President can also make alterations in financial distribution and allocation.

4. Fundamental rights are suspended in the period of emergency. Article 19 automatically revokes. But Article 20 and 21 are never revoked.

5. During the period of emergency, no elections take place.

What is State Emergency

When the constitutional machinery of a state fails, and it is seen that the government is unable to run a state constitutionally or the state is not obeying the directions given by the union government for law and order, then the President has to impose President’s rule.

When the President proclaims national emergency in a state, both the houses of parliament have to give approval for it within two months from the date of the issue of the proclamation. The period of emergency continues for six months after the proclamation, and it may be extended up to three years and not beyond that.

But the same 44th amendment 1978 laid down two conditions that need to be satisfied if the state emergency had to be continued or operated beyond one year:-

1. The national emergency must be in operation in India. It may be imposed in the whole of the territory of India or any part of the state.

2. If the report of election commission suggests that elections in that state assembly are not possible.

The report contained some suggestions in regard to the imposition of President’s rule in a state:-

1. The report opined that Article 356, which deals with state emergency, must be used as a weapon of last resort.

2. The President imposes the state emergency on the report of the governor.

3. In the breakdown of government, it is the role of the governor to make a healthy government. Every possibility must be looked out for majority support of the government in assembly elections.

4. Before imposing an emergency, an alert or warning must be given to the government to settle the matter amicably.

5. It was said that Article 356 must be used in rare situations and circumstances. It cannot be a handy tool to maintain peace and order.

When the President’s rule is in operation in a state, it temporarily changes the structure of a state. The effects that take place are:-

1. All the powers of the state get vested in the President. He becomes a deciding authority in that state.

2. The parliament takes all the decisions instead of the state assembly and state council.

3. It does not affect the fundamental rights of a person.

4. The President of India makes all the laws for that state until the continuation of the emergency.

What is Financial Emergency

The consequences of financial emergency are:-

1. All the finance matters come under the direct control of the central government.

2. The President of India may issue directions in the reduction of salaries of government employees.

3. All the bills related to finance shall be reserved for future consideration, like money bills, financial bills, etc.

Read Next: Pardoning Powers of the Governor With Latest Updates and Judgements