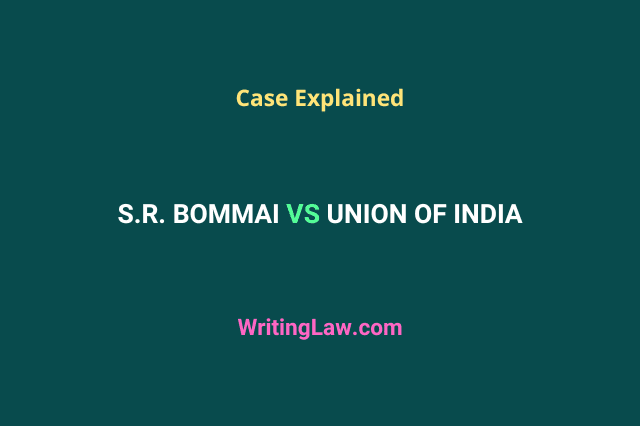 Article 356 of the Indian Constitution is one of the most important Articles when it comes to determining issues of centre-state relations.

According to Article 356, the central government can take control of any state government by the President’s proclamation if the state government fails to work according to the provisions of the Indian Constitution, such as in circumstances where the state apparatus fails. As a result, issues relating to this Article are frequently contentious (likely to cause argument).

In the case of S.R. Bommai vs Union of India, the Supreme Court issued a landmark decision that would serve as a model for future disputes between the centre and the states.

In this law note, you will learn about the facts, issues, arguments, and judgment of S.R. Bommai vs Union of India.

Facts of the S.R. Bommai Case

The largest governing party in Karnataka’s state legislature, Janta Dal, was led by S.R. Bommai, the petitioner in this case. With the addition of thirteen members, the party was doing well, but that’s when K.R. Molakey and other legislators felt paralyzed in the party, prompting them to write a letter to the Governor requesting that they withdraw their support. This letter was then handed to the President by Governor Pekentanti Venkatasubbaiah, stating the conflict between the parties and the large quarrel among the legislators. The Governor then proposed the President’s rule under Article 356, citing the lack of decorum of the government not to be ruled by a minister, including the council of ministers.

Two days later, seven of the nineteen legislators wrote a letter to the Governor confirming their support for the chief (S.R. Bommai). Despite receiving those letters, the Governor refused to enable Bommai to prove his party’s majority in the assembly, further denying a floor test to the government.

In April of 1989, the President declared the merits specified by the Governor, which were confirmed by the Parliament under Article 356(3). Bommai had originally challenged the constitutionality of the proclamation in the High Court; the court then dismissed his writ petition, which further prompted him to seek relief from the Supreme Court.

There were four major issues raised in this case:

Arguments in the S.R. Bommai Case

The following were the arguments advanced by both petitioners and respondents:

Arguments Given by the Petitioner

Arguments Given by the Respondent

Judgment of the S.R. Bommai Case

The court’s judgment has proven to be the most effective in addressing the problem of executive abuse of power.

Comprehending the ideas behind the Constitution’s framers with the support of the Constituent Assembly and their deliberations, the court has rejected the contention that the state government falls under the central government in all its wisdom.

The court stated that federalism and secularism are crucial components of the basic structure of the Constitution and the nation. The court also overturned the ruling by the state of Rajasthan (in State of Rajasthan vs Union of India (1977)), as the decision ruled that the President’s decision should not be susceptible to judicial review but that the central government alone would state its validity. Through this, the court recognized and addressed the political parties’ move to disrupt the pluralistic form of democracy; hence, the judiciary operated and will continue to operate as a watchdog to ensure there is no misuse of power.

Although the court provided principles for establishing the President’s rule in states, there is still room for union cabinet discretion along with the President.

The Bommai case decision put an end to the long process of the central government dismissing the state government without cause. Before this ruling, several political parties took advantage of the constitutional framework to gain political mileage and settle scores with their opponents. This case significantly curtailed a long-standing practice.

The ruling further noted that the government’s test on the floor of the assembly should not be done in ambiguous words and should not be subject to the Governor’s opinion.

Despite the fact that there was no concern for constitutional change, in this case, the basic doctrinal notion was applied.

Read Next:
1. 10 Reasons Why the Centre Is More Powerful Than The States!
2. Federal vs Unitary Structure With Pros, Cons, and Differences
3. Cooperative Federalism and Competitive Federalism in India
4. Is the Indian Parliament Supreme or the Judiciary (Supreme Court)?

Gayatri Singh is a third-year law student at UPES Dehradun. Her passion lies in writing and literature. Gayatri is a highly motivated and energetic individual who wishes to help India advance in the legal field.
WritingLaw » Case Laws » S.R. Bommai vs Union of India – Case Law Explained

If you are a regular reader, please consider buying the Law PDFs and MCQ Tests. You will love them. You may also support us with any amount you like. Thank You.
2022-12-02