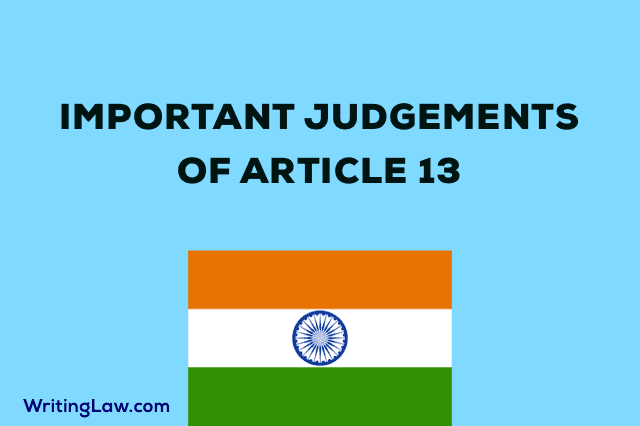 This is an important case as it created and established the concept of Judicial Review. In this case, the US Supreme Court said that the court has the power to do a judicial review on legislative actions. The counterpart of this case (Marbury vs. Madison) in India is L. Chandra Kumar vs. Union of India.

In this, it was held that the Supreme Court, through Article 32 and the High Court through Article 226, have the power of Judicial Review. That means the SC and HC can judicially review the legislative actions. SC also held that the power of Judicial Review under these two articles is a part of the basic structure of the Indian Constitution, and no amendment can curtail this power.

State of Gujarat vs. Ambika Mills, 1974: In this, it was held that the doctrine of eclipse is applicable to citizens as well as non-citizens.

Deep Chand vs. State of UP, 1959: The doctrine of eclipse is not applicable to post-constitutional law.

Basheshar Nath vs. Income Tax Commissioner, 1959: Unlike the US Constitution, in India, the waiver of Fundamental Rights is not allowed.

Prachi Gupta has written this article. She is a guest author for WritingLaw.

If you are a regular reader, please consider buying the Law PDFs and MCQ Tests. You will love them. You may also support with any amount you like. Thank You.
2020-05-07