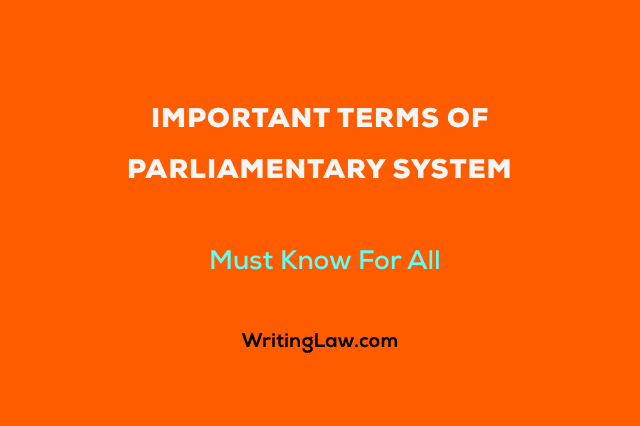 There are some terms in our Indian Constitution, which need to be understood thoroughly to relate with the provisions in it. What purpose a provision is serving can only be acknowledged by a good understanding of some terms.

The parliament of India comprises of Rajya Sabha, Lok Sabha, and the President. A law student must be well updated with the parliamentary proceedings and certain terms concerning the parliament.

Shadow cabinet means cabinet in waiting. The main opposition party in the parliament forms this notional cabinet. In this cabinet, members are assigned to perform some special functions. Such members lead the opposition in the discussions carried out in parliament.

It is a full-fledged government. It can take any decision in policymaking and other important issues. In India, the interim government came into power with India’s independence from 15 August 1947 till March 1952.

When no party is able to form government in the majority in union or state, then two or more political parties with common goals and aspirations ally and form a coalition government. For example, in the state of Maharashtra in 2019.

In a general election, when no single political party or coalition of parties is able to form a stable or majority government then such a situation of parliament is called Hung parliament.

When the houses of parliament that are Rajya Sabha and Lok Sabha finally disagree over the passing of a bill in which they enjoy equal legislative jurisdiction, it is called a deadlock between the two houses of parliament. In such a situation, the President summons for the joint session to remove the dead lock.

To constitute a meeting of any house of the parliament, one-tenth of the total members of the house must be present to initiate the meeting. If there is no quorum at any time during a meeting, then it shall be the duty of the chairman of Rajya Sabha or speaker of Lok Sabha to adjourn the house or suspend the meeting till the quorum.

A whip is the floor manager of the parliament and regulates the behaviour and discipline of the members. It is a result of a parliamentary convention. Every political party appoints its own whip. The members who do not obey or follow the orders of the whip are subject to disciplinary action.

When a bill presented in either of the houses, gets passed by both the houses of parliament and further receives the assent of the President, such a bill becomes an act of the legislature.

It is a procedure where a member of the house draws the attention of the minister on an urgent issue or a matter of immediate concern. The minister in call of the matter of urgent importance makes a brief of the statement, and after that, the queries of members are resolved and clarified.

It is the first speech or address by the member after he is elected or nominated in the Rajya Sabha.

It is a question asked in the house for which an oral answer is not required, but the answer is given in written form on the table.

If the chairman of the Rajya Sabha finds the proceedings or records of parliament to be derogatory, indecent, or unparliamentary, then such words, phrases, or derogatory expressions are ordered to be deleted from the records. This is known as expunction.

When the house is called for sitting, the first hour of the parliamentarian session is question hour. It is the time when members can raise questions related to meetings.

Read Next: The Withering State of Indian Parliamentary Democracy

If you are a regular reader, please consider buying the Law PDFs and MCQ Tests. You will love them. You may also support us with any amount you like. Thank You.
Explore WritingLaw's Homepage
2020-08-31