What Are the Powers and Functions of the Indian Parliament 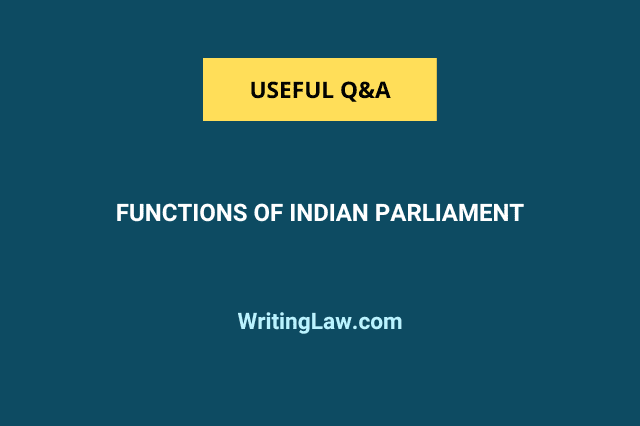 This law post talks about the five major functions of the Indian Parliament and explains each of them in brief.

India is run by a Parliamentary form of government. The Parliament is the highest legislative body of India. It consists of three organs – the President, the Council of States (the Rajya Sabha) and the House of the People (the Lok Sabha). The President is regarded as an integral part of the Parliament even though he is not a member of either House of Parliament.

Further, the Parliament in India is not a sovereign body and has derived all its powers from the Constitution of India.

Powers and Functions of the Parliament of India

The functions of the Parliament are contained under Chapter II (Articles 79 to 122) of Part V of the Constitution.

Here are five major functions of the Indian Parliament:

The most important function of the Parliament is to make laws. The first step in the legislative process is the introduction of a bill. An ordinary bill, that is, a bill other than a money bill or financial bill, can originate in either House of Parliament. The bill, after both Houses pass it, becomes law only with the assent (consent or permission) of the Indian President.

Further, the money bill is only introduced in the Lok Sabha that too with the recommendation of the President.

Additionally, the Parliament enacts legislation on all the topics mentioned in the Union List and the Concurrent List (7th Schedule of the Constitution).

The Parliament has the authority to discharge the cabinet from its office by a vote of no-confidence. In addition, it has the right to reject any law introduced by the cabinet, including budget proposals.

Further, the adjournment motion is only allowed in the Lok Sabha to bring the Parliament’s attention to any current topic of critical public importance.

The Parliament has effective control over financial matters. For example, the amount to be spent for various government purposes is specified in the Union Budget. And the Union Budget is only passed after the assent of the Parliament. Also, even though the cabinet is in charge of collecting taxes from Indian citizens, the tax on anything cannot be imposed without first having an appropriate Act approved by the Parliament.

The Lok Sabha has the power to choose from its members to serve as its Speaker and Deputy Speaker. Similarly, the Rajya Sabha has the authority to elect the Deputy Chairman from among its members.

Any proposal for a constitutional amendment is made by Parliament. Either House of Parliament can introduce a bill for amendment.

If you are a regular reader, please consider buying the Law PDFs and MCQ Tests. You will love them. You may also support us with any amount you like. Thank You.
2023-01-22