5 Reasons Why Judiciary is Independent in India 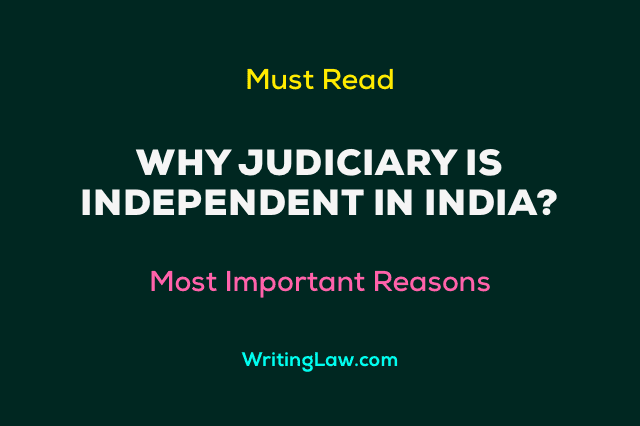 The judicial structure of the country is considered as the safeguard of the Indian Constitution and principles underlying within. It is the judiciary which protects the rights of the individuals enshrined in Part III of the Constitution.

The people of India may lose faith in other organs of the government but they have a firm belief in the judicial system of the country. Even today, when a dispute arises between people, they say to each other, “see you in the court.” Anything can get corrupted but not judiciary.

Judiciary is considered as the third pillar of the government. As per Montesquieu theory of separation of powers, all three organs that is the legislature, executive, and judiciary work in their own spheres.

Legislature and executive also come under the blanket of accountability, but the judiciary is separate from the executive. Article 50 of the Constitution also says that the state shall separate judiciary from executive.

For fair, just, and unbiased decisions, the judicial organ must be free from any kind of dominance or undue influence. The judiciary shall work upon their will and conscience and not under threat or influence.

What Does Independence of Judiciary Mean?

Independence of judiciary means ‘Judiciary work is free from any kind of external influence or control.’ Judiciary works as an independent body and not through the channel of government. In the real sense, we can say that our judiciary is sovereign. The judicial system needs to work in isolation so that the decisions shall be free from any influence.

The preamble of the Indian Constitution promises justice social, economical and political. To achieve the motto, it is expected for the judiciary to be impartial. The judges of the country are not obliged to give a decision according to the ruling party or government. Any kind of dominance is prohibited.

The independence of judiciary also satisfies the real test of a democratic country where the organ for delivering justice is unbiased and free. And without misuse of any power, our integrated judicial system is able to deliver an impartial decision.

Here are five provisions that answer ‘why judiciary is free, independent, and pressure-free in India?’

Once a judge is appointed, he remains as a judge. The judges have the security of the tenure of their service. They are not appointed on the pleasure of President. They can’t be removed from their office without any reasonable cause that too on the ground of misbehaviour and incapacity.

The Indian Supreme Court has the power to issue writs under Article 32 of the Constitution. The Parliament can’t abridge the power of issuing a writ in any case. Parliament by law can not limit or reduce or curtail the powers of the apex court.

The Supreme Court may be vested with more powers in adverse circumstances by the Parliament but can never reduce it. The jurisdiction of the Supreme Court is whole of India. It is considered as the final or last resort of justice.

5. Prohibition on Practice After Retirement

Related Post You Must Read Next: 10 Constitutional Provisions That Guarantee Independence of Supreme Court

Arushi, WritingLaw’s editor, wrote this brief post. I hope you enjoyed reading this.

WritingLaw » Law Notes » 5 Reasons Why Judiciary is Independent in India

If you are a regular reader, please consider buying the Law PDFs and MCQ Tests. You will love them. You may also support with any amount you like. Thank You.
2021-06-18