Inherent Powers of High Court Under CrPC with Important Cases 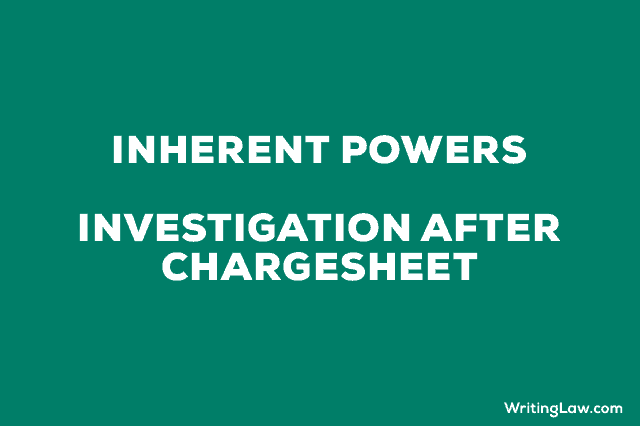 The Inherent Powers of the High Court

Inherent Powers are those powers that are not mentioned anywhere in the code. Inherent power or the inherent jurisdiction of the High Court may be exercised in a proper case either to prevent the abuse of the process of any court or to secure the ends of justice. These powers of the High Court should be used only in exceptional cases.

In the following cases, the inherent power of the High Court could be exercised to quash the proceedings-

The above list of points is not exhaustive. High Court may exercise its inherent power in other situations as well to serve the ends of justice.

When to Use Inherent Power

In Divine Retreat Centre vs State of Kerala, SC 2008, the Supreme Court held that there are three circumstances under which the inherent jurisdiction under section 482 of CrPC may be exercised-

1. To give effect to an order under the code.
2. To prevent abuse of the process of the courts.
3. To otherwise secure the ends of justice.

Note: No limitation period has been prescribed for making an application under section 482 of CrPC. However, the application is to be filed within a reasonable time.

Can Not Order Stay of Arrest

In Ashok Kumar Singh vs State of Bihar CrLT SC 1993, the Supreme Court held that the High Court, while exercising its jurisdiction under section 482, can not order the stay of the arrest of the accused during the investigation.

In State of Punjab vs CBI and others, SC 2011, the Supreme Court held that fresh investigation or re-investigation after the filing of charge sheet by police could be ordered by High Court under section 482 of CrPC to secure the ends of justice. Further held that inherent powers of the High Court are not limited or affected by section 173(8).

Cancellation of Bail by High Court

For the ends of justice, the High Court may order for the cancellation of bail using its inherent powers under section 482.

Quashing of FIR by High Court

In DC Jain vs UOI, 1994, Punjab and Haryana High Court: The allegation in FIR prima facie constituted the offence of cheating, and a civil suit was also pending in respect of the same offence. It was held that the pendency of civil suit is no ground for quashing the FIR.

It was held in Jagdish Ram vs the State of Rajasthan that FIR does not deserve to be quashed by the High Court in the exercise of power under section 482 of the code merely on account of delay.

Read Next: Inherent Powers of the Court Under the Civil Procedure Code

If you are a regular reader, please consider buying the Law PDFs and MCQ Tests. You will love them. You may also support with any amount you like. Thank You.
2021-07-22