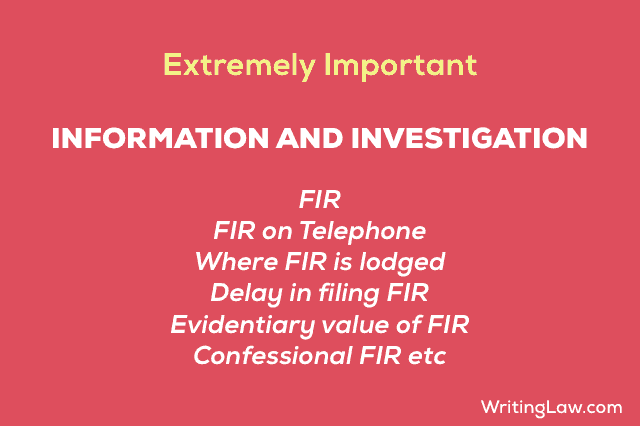 Section 154 of CrPC has three objects-
1. To inform the magistrate of the district and the DSP who are responsible for the peace and safety of the district of the offences reported at the police station.
2. To make known to the judicial offices before whom the case is ultimately tried.
3. To safeguard the accused against subsequent variation or additions.

FIR is not defined in CrPC. However, it may be defined under the following points:-

Non-supply of a copy of FIR

According to clause 2 of section 154, a copy of FIR must be given free of cost to the informant.

There is a question that the provisions of section 154(2) are directory or mandatory. The answer is directory. Mere non-supply of the copy of FIR to informant does not vitiate the registration of FIR.

Hon’ble Supreme Court held that FIR is intimation about the occurrence of an incident.

It was held that when any information disclosing a cognizable offence is laid before the officer in charge of a police station, he has no option but to register the case on the basis of such information.

Cryptic and ambiguous telephone message which does not clearly specify a cognizable offence cannot be treated as FIR.

But where there is proper information about the commission of a cognizable offence and is reduced in writing by a police officer, then it can be treated as FIR.

Where FIR is Lodged

The general rule is that ordinarily, the information about the offence committed is to be given to the police station having territorial jurisdiction where the offence has been committed. But this does not mean that it can not be lodged elsewhere.

In the case of, State of AP vs Punati Ramulu, 1993 SC, the police constable refused to record the information on the ground that the said police station had no territorial jurisdiction over the place of crime. The Supreme Court held that such refusal is negligence of duty on the part of the constable. Because any lack of territorial jurisdiction could not have prevented the constable from recording information about the cognizable offence. And forwarding the same to the police station having jurisdiction over the area in which the crime was said to have been committed.

In this case, Hon’ble Supreme Court held that if in a rape case lodging of FIR was delayed for ten days, the delay will be deemed to have been reasonably explained where the honour of the family was involved, and members had to decide whether to take the matter to the court of not.

Delay lodged FIR loses its weightage, but if there is a satisfactory reason behind the delay, then it may be excused.

Where the delay in filing FIR is due to its being lodged at a wrong police station, it was held to be a reasonable reason.

In rape cases, the delay cannot diminish the weightage of FIR.

State of Punjab vs Gurmit Singh, 1996

In this case, the Supreme Court held that in sexual offences, the delay in lodging FIR is reasonable because of the reputation of the victim or her family members. They can take time to think of going to a police station or not.

An FIR is not a substantive piece of evidence. No person can be convicted only on the basis of FIR.

It is a well-settled principle of law that there can be no second FIR in the event of any further information being received by the investigating agency in respect of the offence.

High Court has the power to quash FIR under section 482 of CrPC by using the inherent powers; if the High Court is satisfied that there are facts and circumstances for quashing FIR.

You may also like to read: When the investigation cannot be completed in 24 hours? Section 167 CrPC Explained