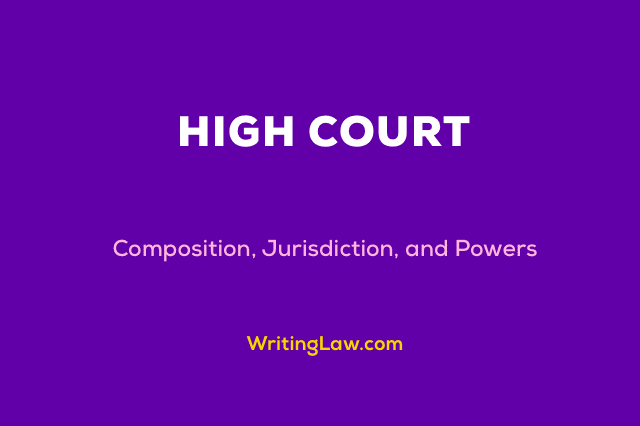 Almost every state has a High Court and is considered the topmost court at the state level. Many subordinate courts in a state work under it.

Article 214 to 231 of Part VI of the Constitution deals with the provisions of the High Court.

Every High Court of a state or states consists of a Chief Justice appointed by the President with the consultation of the Chief Justice of India and the Governor of that state.

Along with the Chief Justice, other judges are appointed by the President as per the requirement of work. There is no specific limit prescribed for the appointment of judges in a High Court. It may vary from time to time.

A person who is to be appointed as a judge of a High Court must possess the following qualifications:

2. He should have ten years of experience as a judge. or

3. He should be a practising advocate for a period of ten years in the High Court.

4. No age limit is prescribed for the appointment of judges of the High Court.

5. But unlike the Supreme Court, any eminent jurist is not eligible for becoming a High Court judge.

1. A judge of the High Court holds the office until the age of 62 years.

2. A High Court judge gives his resignation to the President in writing.

3. If the President desires so and on the recommendation of parliament, he may remove any High Court judge.

4. A High Court judge is said to vacate his office when he is transferred to another High Court or is elevated to the Supreme Court.

The removal of the judge of a High Court can be based on two grounds. That is misbehaviour or incapacity to hold office.

A High Court judge may be removed by order of the President only. But the President may remove a judge only when the parliament by 2/3 majority approves for the removal.

The procedure for impeaching a High Court judge is quite similar to that of a Supreme Court judge.

Jurisdiction and Powers of High Court

A High Court is the highest appellate authority in a state. It enjoys many powers like:

It means the High Court has the power to hear a case in the first instance as an original court. Many matters are filed directly in the High Court because of pecuniary (monetary) limits, like matters related to marriage, will, contempt of court, enforcement of fundamental rights, and so on.

Article 226 of the Constitution gives the High Court the power to issue writs of habeas corpus, mandamus, certiorari, quo warranto, and prohibition.

The High Court is the topmost court in terms of hierarchy in a state. It is subordinate to the Supreme Court but controls all subordinate courts.

The High Court of a state has appellate jurisdiction in both matters – civil and criminal.

In criminal matters, an appeal can be filed if the imprisonment is more than seven years. And in cases of capital punishment, it is necessary for the district judge or the additional district judge to confirm the death sentence from the High Court before passing it.

According to Article 227 of the Constitution, the High Court works as a supervisory body in a state. It has to supervise all the courts and tribunals in a state that come under its territorial jurisdiction. The power of the High Court is not unlimited to have unnecessary control over subordinate courts. But this power must be used by the High Court in rare cases and sparingly.

The High Court is a court of record under Article 215 of the Constitution. All the judgements and orders which the concerned High Court pass shall be kept as the court of record for future references. These judgments act as precedents for the lower and subordinate courts.

The High Court has the power to punish for the contempt of court:

If the High Courts find it to be against the spirit of the Constitution or violative of fundamental rights or made by an authority incompetent to make it, then it is declared void.

Read Next:
1. Prosecution of Judges and Public Servants
2. About Supreme Court of India – Collegium, Powers, Judges

Arushi has written this post. She is WritingLaw’s editor.

If you are a regular reader, please consider buying the Law PDFs and MCQ Tests. You will love them. You may also support with any amount you like. Thank You.
2021-07-04