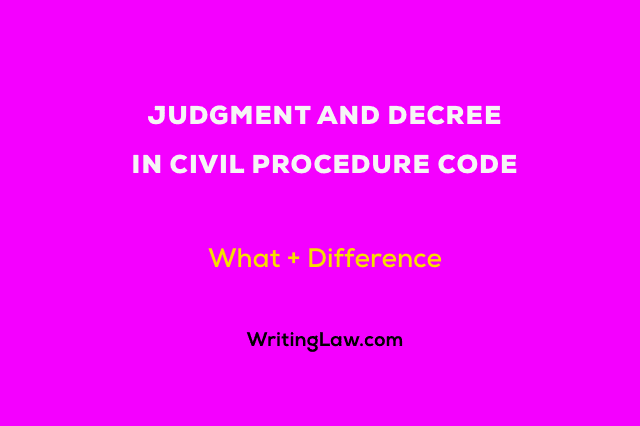 The purpose of a trial in a case is to reach the conclusion. The conclusive determination of a case is important for reasoning as to which party has won or lost.

Every case leads to a judgement by considering facts, pieces of evidence, witnesses, and other material points. It is the judgement that comes in a case, and on the basis of judgement, a decree is drawn. A decree follows the judgement.

Section 2(9) of the Civil Procedure Code, 1908, defines judgement as a ground for determination. Order XX, Rule 4 provides that the judgement shall contain:

Some Essential Points on Judgement

1. After hearing the case, the judgement shall be pronounced in the open court so that every person sitting in court can see and realise the justice done.

2. The judgement shall be given within 30 days from the date of the last hearing. But if there is an exceptional situation, then it may extend up to 60 days.

3. If the court extends the period of giving judgement, then notice must be given to the parties of the date decided for judgement.

4. The judgement will be based on the matter in issue.

5. It is not necessary or compulsory for a judge to read the whole judgement in court. The judge may only orate the relevant parts of the judgement.

What is a Decree

1. The formal expression of a court. The court must be of competent jurisdiction. If the court is not competent, the decree shall be a nullity.

2. An expression that conclusively determines the rights of the parties.

3. The determination with regard to all matters in issue or any matter in issue.

4. The decree may be either preliminary or final. Or, partly preliminary and partly final.

5. The decree includes rejection of a plaint under order 7, rule 11, and determination of question under section 144.

6. The decree shall not include appealable orders and any order of dismissal for default.

Three kinds of decree are:

What is Preliminary Decree

What is Final Decree

The final decree is the one that completely concludes a suit. The decree, which finally disposes of the suit! When the court determines all the issues, it is a final decree.

For example, A suit was filed for the partition and possession of the immovable property. The court, in the first instance, partitioned the property, which is a conclusion on a particular issue of partition. It is said to be a preliminary decree. The deciding of possession and which part of the property would go to which owner has to be decided. The decision on possession and percentage of shares in property is a final decree which has conclusively determined the issues.

What is Partly Preliminary and Partly Final Decree

For example, A suit was filed for the eviction of a tenant and arrears of rent. The court draws a decree in favour of the landlord by giving him back his possession. But the arrears of rent are to be calculated, and then the court can direct the tenant to pay it to the landlord. So giving back possession is final, and calculating arrears is preliminary with respect to the second part. Though the determination was done in one decree only.

Difference between Judgement, Order, and Decree

A judgement is a statement given by the court which states the grounds on which the judgement is given, and the decree is drawn.

Order in a suit may be many. A court may pass any number of orders in a suit. For example, there may be an order of allowing any application. Every order is not appealable except those mentioned in order 43.

If you are a regular reader, please consider buying the Law PDFs and MCQ Tests. You will love them. You may also support with any amount you like. Thank You.
2021-02-22