Legitimacy of a Child under Indian Evidence Act with Case Laws 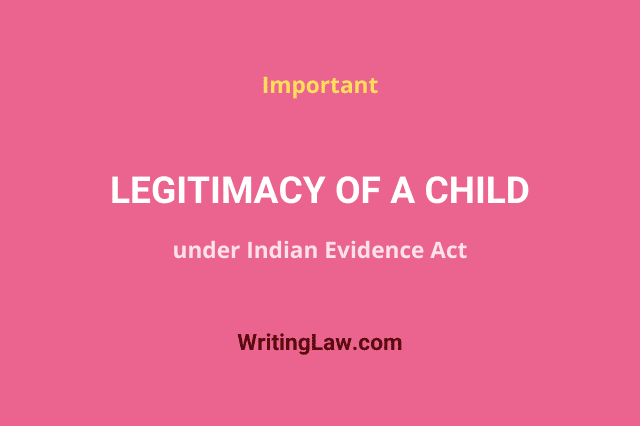 The legitimacy of a child has been dealt with under section 112 of the Indian Evidence Act. The legitimacy of a child refers to the status of a child born or conceived during the marriage. It is very certain as to which woman who gave birth to a particular child is his mother, but it is not possible to say as who is the person from whom such child is begotten. Hence maternity is a fact, and paternity is a surmise. Surmise means a supposition that something may be true, even though there is no evidence to confirm it.

Section 112 of the Indian Evidence Act

Section 112 of the Indian Evidence Act lays down that:

this shall be conclusive proof that it is the legitimate child of that man.

Important: This provision is subject to the exception that the man and woman had no access to each other.

In SPS Balasubramanayam vs Surattoyan, the court held that a marriage could be presumed from the long cohabitation between a man and woman within the meaning for giving rise to this presumption of conclusive proof.

Note: This section applies to the legitimacy of children of a married person only. On the birth of a child during the marriage, the presumption of legitimacy is conclusive, no matter how soon the child’s birth occurs after the marriage.

In other words: The term access used in section 112 of the Indian Evidence Act refers to the existence of opportunity of marital intercourse. However, non-access can be established if it is proved that the husband was physically incapable of procreating.

Object of Section 112 of the Indian Evidence Act

The object of section 112 of the Indian Evidence Act is:

Is a DNA test admissible under section 112 of the Indian Evidence Act?

Generally, a DNA test is not permissible by the court in India as it results in the violation of the right to privacy.

The Supreme Court in Goutam Kundu vs State of West Bengal has laid down the following rules for blood test to prove paternity:

1. The courts in India cannot order for the blood test as a matter of course.

2. The application for blood tests cannot be entertained.

3. There must be a strong prima facie case that the husband should establish non-access to dispel the presumption under section 112 of the Indian Evidence Act.

4. The court must examine the consequence of ordering a blood test, whether it will have the effect of branding the child as a bastard and the mother as unchaste.

5. No one can be compelled to give blood samples for analysis.

Refusal of wife to comply with a DNA test.

In Dipanwita Roy vs Ronobroto Roy, the Supreme Court held that it would not be incorrect to issue direction to the wife to undergo a DNA test to determine the parentage regarding the case challenging her infidelity. And if the wife refuses to undergo the test of the child to determine parentage, an adverse presumption can be drawn against the wife.

Read Next:
1. Parentage, Legitimacy, and Acknowledgement of Child in Muslim Law
2. Maintenance Under The Criminal Procedure Code
3. List of Important Sections of Indian Evidence Act

This article is written by Nupur. She recently completed LLB from Dehradun. She is creative and loves reading.
WritingLaw » Law Notes » Legitimacy of a Child under Indian Evidence Act with Case Laws

If you are a regular reader, please consider buying the Law PDFs and MCQ Tests. You will love them. You may also support us with any amount you like. Thank You.
Explore WritingLaw's Homepage
2021-08-16