Parentage, Legitimacy, and Acknowledgement of Child in Muslim Law 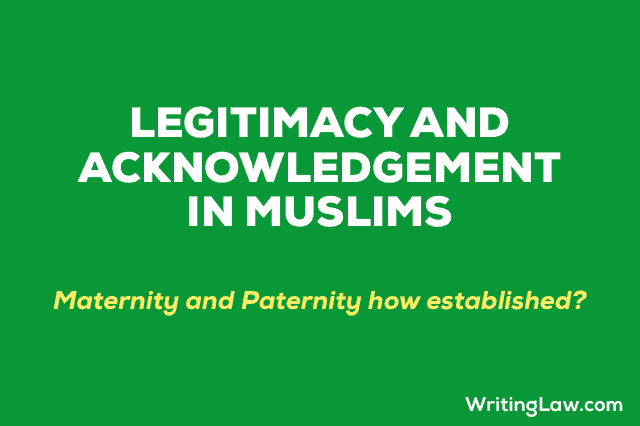 Parentage is the relation of parents to their children. The parentage includes maternity and paternity.

Parentage is generally used for a legal relationship which the child has with the parents. These legal relationships are associated with certain rights and duties such as rights of inheritance, maintenance, and guardianship.

How Maternity is Established in Muslim Law

Under Sunni Law, the maternity of a child is established in the woman who gives birth to the child irrespective of whether the birth was the result of a valid marriage or adultery (Zina).

But under Shia Law, only birth is not sufficient to establish maternity. It has to be also proved that the birth was a result of a lawful marriage.

So we can say under Sunni Law, an illegitimate child has his maternity in the woman who gave birth, and the child is entitled to inherit from mother alone.

How Paternity is Established in Muslim Law

Paternity of a child can only be established by marriage between his or her parents. The marriage may be valid or be irregular. But it does not become void. Paternity is established in the husband of the mother of a child.

Paternity is established in a person said to be a father by proof or legal presumption that the child was begotten by him on a woman who was at the time of conception his lawful wife and was in good faith and reasonably believed by him to be such or whose marriage being valid.

An issue of void marriage has neither paternity nor maternity under Shia Law.

A person born in lawful marriage is said to be the legitimate child of the spouses. So the main point in case of the legitimacy of a child is the marriage between his or her parents.

Special notes regarding the Presumption of Legitimacy

1. A child born within six months after the marriage: the child is illegitimate unless the father acknowledges the child.

2. A child born after six months from the date of marriage is presumed to be legitimate.

According to section 112 of the Indian Evidence Act, if a child is born during the marriage or within 280 days after the dissolution of marriage, the child shall be presumed to be the legitimate child of the spouses.

Muslim law does not recognise the institute of adoption, which is recognised by other systems.

Muslim law recognises the institution of ‘IKRAS’ (acknowledgement) where the paternity of a child, which means his legitimate decent from his father, cannot be proved by establishing a marriage between his parents at the time of conception of birth.

Muslim law recognises acknowledgement as a method whereby such marriage and legitimate decent can be established as a matter of substantive law for the purpose of inheritance.

Justice Mehmood held that where marriage cannot be proved by direct evidence and no legitimacy be established, Muslim law prescribes a means whereby the marriage and legitimacy may be established as a matter of substantive law, and that is acknowledgement of paternity.

Acknowledgement under Muslim law is a rule of Substantive Law and not a rule of evidence. It means it is not a presumption under the Evidence Act.

It confers the status of sonship and rights to succeed. A child whose illegitimacy is proved by reason of the union between the parents not being lawful; such a child cannot be proved by acknowledgement.

Necessity of Acknowledgement of Legitimacy

When there is direct proof of marriage and a child born out from such marriage, the question of acknowledgement does not arise because, in such cases, the legitimacy is ipso facto established.

If there is no such direct proof of legitimacy, then legitimacy may be proved by indirect proof, which is called acknowledgement.

The father made the acknowledgement of the child in a casual manner. He never intended that his acknowledgement should have serious effects. It was held by the Privy Council that the act of the father is not sufficient to confer the status of legitimacy.

2. Age of the Acknowledger

The age of the parties must be such that it is possible that they may be father and son. According to Bailie, the acknowledger must be at least 12.5 years older than the person acknowledged.

3. The child of others

The child who is acknowledged must not be known as a child of another.

An offspring of Zina is one who is born either without marriage or a mother who was the married wife of another or of void marriage.

When the man has committed Zina with a woman, and she has delivered a son, such a son cannot be acknowledged. So the acknowledgement must be of the child who is offspring of a legal marriage.

5. Legal marriage possible between parents of the child acknowledged

Similarly, if it is definitely proved that no marriage took place between the parties, the issue will be illegitimate, and the acknowledgement will be ineffective.

The child, if adult, must confirm the acknowledgement.

7. Competency of the Acknowledger

The acknowledger must be competent to make a contract, which means he must be major and of sound mind.

Acknowledgement produces all the legal effect of a natural paternity and vests in the child the right of inheriting from the acknowledger.

In the case of wife, which means the mother of an acknowledged son, it has the effect of giving her the status of legal wife and hence the right of maintenance and inheritance.

You may also like to read:
1. Legitimacy of a Child under Indian Evidence Act
2. Maintenance Under The Criminal Procedure Code
3. Laws and Policies for Protection of Children in India