What is Natural Justice, its Principles, Prerequisites and Exception 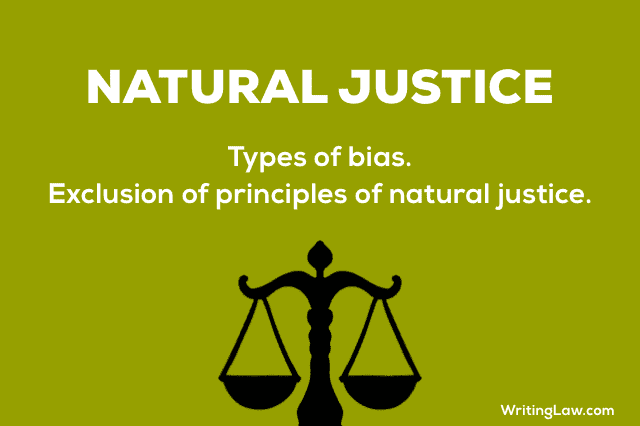 What is Natural Justice?

Natural justice is also known as universal justice, substantial justice, or fair play in action. It is an essential concept of divine law, which is based on the law of equity. Its importance can be assumed to be reflected in every statute or enactment by promoting equity among parties, which means equal treatment and opportunity.

Even if we go back to the ancient era during the reign of Adam and Kautilya Arthashastra, the rule of law has had his stamp of natural justice, which makes it social justice. It was said that the king should shower justice as water flows out from fountains; that is without any bias and must fall into everyone’s hand.

The main principles of natural justice are based on these two legal maxims:

1. Nemo judex in causa sua – It means no one shall be a judge in his own case.
2. Audi alteram partem – It means both the parties/sides must be heard. No man should be condemned unheard.

Absence of bias, interest, or prejudice! The judge should be neutral, impartial, and free from bias are the first and foremost prerequisites of natural justice. A person cannot act as a judge in a cause in which he has some interest, either pecuniary (monetary) or otherwise.

Maneka Gandhi vs Union of India, 1978: An Important Case on Natural Justice

It is well established that even when there is no specific law or provision in a statute or rules made for showing cause against the action made, which affects the right of any individual, the duty to give reasonable opportunity to be heard will be implied from nature. Without listening to the other party, no justice can be done.

The principles of natural justice are not only binding on all courts but also judicial bodies and quasi-judicial authorities.

Must Read: Maneka Gandhi vs Union of India Explained in Simple Words

Exceptions to the Principle of Natural Justice

1. Where a statute or act expressly excludes or a particular provision of it excludes the applicability of the rule. Like there may be some sections that allow decisions to be made ex-parte and both parties are not heard.

2. Where the action is legislative in nature. That is, the legislature itself denies for applicability of the rule in the act.

3. Where doctrine of necessity applies. If a decision is to be made urgently on a shorter notice, then the rule may be excluded.

4. Where facts are admitted or undisputed, then there is no need to call the party again for readmitting the admitted facts. The court can proceed further with admissions made.

5. Where an enquiry is confidential, then there can be ignorance of the principles of natural justice.

6. Where preventive action is to be taken. Like in the case of section 144 CrPC, where immediate action is required, and no reasonable or due time can be given to the other party.

7. Where urgent action is necessary for a government policy decision. Not all rules can be made after discussion. Some rules are commanding in nature.

WritingLaw » Law Notes » What is Natural Justice, its Principles, Prerequisites and Exception