Who Is the Real Owner – Nominee or Legal Heir 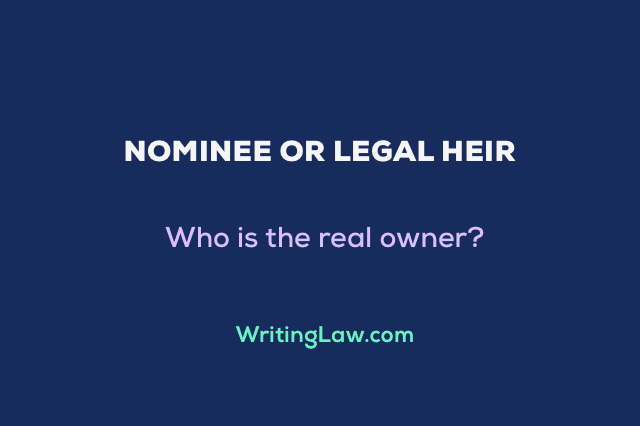 Nomination registration is preferred in all investments. What are the rights and responsibilities of a nominee? Is the nominee the legal owner of the deceased’s assets, or will legal heirs own the assets? Many people have the idea that nominees are the true legal proprietors. In this brief law note, let us discuss the issue.

The dictionary meaning states, a nominee is a person officially designated for a post. Whereas the legal meaning represents a person nominated by the holder to receive the assets after his death. A nominee must be above 18 years of age.

The person who succeeds the assets of the deceased as per succession laws in force or will.

Between Nominee and Legal Heir, who is the Real Owner?

Many people during their investments in their lifetime get misled that nominees are real owners, and it often creates confusion due to the regular usage of the word. The dictionary meaning of the word represents a person who has been officially suggested for a position. Strictly speaking, a nominee is an act of officially suggesting a person to take care of the properties after death and later pass it on to the legal heirs.

Legal heirs are the descendants (either male or female) of a person who is legally entitled to succeed the property after the death of the person.

Example: Ankit has nominated his wife Bidisha in his savings bank account. Ankit has also prepared the will that after his death, all the money in his savings bank account will go to his children after they reach 18 years of age. In this case, after Ankit’s death, Bidisha will hold the money till the children attain 18 years of age. But in the absence of a will, it will be distributed among Bidisha and children.

Case Law 1: Shipra Sengupta vs Mridul Sengupta 2009: The apex court held that nominee to receive the benefits, but later it should be distributed according to laws of succession.

Case Law 2: Uma Sehgal & Others vs Dwarka Dass Sehgal & Others: The high court of Delhi stated that the nominee receives the payment on behalf of the legal heirs.

Case Law 3: Oswal Greentech vs Mr Pankaj Oswal & Others: The company law tribunal held that the legal heir is the real owner and not the nominee.

Death comes unexpectedly. Hard earnings should not fall into the hands of ineligible ones. One should nominate a person wisely to hold his hard-earned property. Simultaneously, he should represent his wish through a will to ensure that the property goes into the hands of his legitimate legal heirs after his death.

To sum up, who is the real owner – legal heir or nominee? A nominee is just a trustee who holds the properties on the death of the deceased and passes it on to his legal heirs. Hence, legal heirs are the real owners.

This article is written by Amit Kumar Das, B.Tech, LLB. He is a practising advocate from Odisha High Court & Puri District Courts.
WritingLaw » Law Notes » Who Is the Real Owner – Nominee or Legal Heir

If you are a regular reader, please consider buying the Law PDFs and MCQ Tests. You will love them. You may also support with any amount you like. Thank You.
2021-07-15