Objection to Jurisdiction and Transfer of Suits 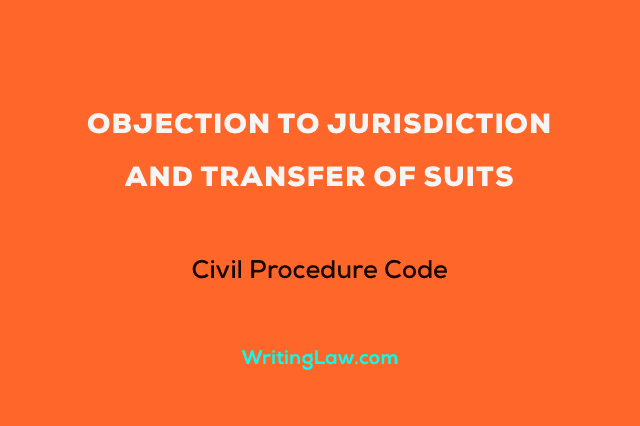 Jurisdiction can be categorized into three heads. They are:-

Subject matter jurisdiction: It means that a competent court is decided on the basis of the nature of the case. If the case is of civil nature, then the suit is filed in civil court or if the case is criminal, then to the Magistrate’s court.

When Objections to Jurisdiction be Raised

1. The objection related to the place of suing must be objected in court in the first instance.

2. It is advisable that it must be raised at the earliest possible opportunity which a party gets.

3. The objection cannot be raised if the issues in the case are settled. It must be raised before settlement.

4. The court shall entertain no objection after the settlement of issues unless the consequence results in the failure of justice.

5. The objections related to the pecuniary limits of court cannot be raised after the settlement of issues. It has to be raised in the first instance.

Power of the Court to Transfer Suits

If a case to be decided may be filed in various jurisdictions of court, then a person may get his case transferred from one court to another. Before filing the application of transfer of case, the party has to send notice to the opposite party as well.

For getting the case transferred, the party has to raise the objection at the earliest opportunity stating the reasons for a case to get transferred.

To What Court Application Lies

A person filing objection for transfer of case from one court to another shall submit his application in the manner prescribed:-

1. If the multiple courts having jurisdiction to try a case are subordinate to the same appellate court, then the application shall lie in that appellate court.

For example, if courts X and Y have jurisdiction to try a case, and both the courts are subordinate to an appellate court, Z. Then the application shall lie to Z court.

2. If the different courts have jurisdiction to try a case are subordinate to the same high court but different appellate courts, then the application shall lie to that high court.

3. If the courts having jurisdiction are situated in two different states and are not subordinate to the same high court, then the application shall be given in that high court within whose jurisdiction that court is situated where the proceedings firstly started.

For example, both Patiala house court and Ghaziabad court are having jurisdiction to try a case. They both have different high courts being in different states. It was Ghaziabad court at which the case was first brought. Now the application shall be given in Allahabad high court, and it will decide that which court shall proceed with the case.

Power of Court to Transfer and Withdraw Case

1. The high court or district court may transfer or withdraw a case on the application of any of the parties to the suit or suo-moto (on its own). Before transferring, the court shall give notice to the parties and hear their objections and then transfer the case.

2. The transfer may be of a suit, appeal, or any proceedings. The court transferring shall transfer it to the court subordinate to him.

3. The high court or district court may also withdraw a case from one court and try itself or transfer it to another court for disposing it or may also re-transfer to the court from which case was withdrawn.

4. The transferee court may either try the suit from the stage it was transferred or may try it from the beginning.

5. Transfer may also take place from such a court which has no jurisdiction to try that case.

1. Any party to the suit may submit an application in the Supreme Court under section 25 of the Civil Procedure Code for the transfer of a case.

2. The Supreme Court, after receiving the application, shall give notice to the parties for hearing.

3. If the Supreme Court is satisfied that a case needs to be transferred, then it may transfer it to the desired court to obtain ends of justice.

4. The Supreme Court deals with inter-state (between states) transfer of a case and not intra-state (within same state) transfer.

5. The application to be given in the Supreme Court for transfer of case shall be supported with an affidavit.

6. The transferee court (court to which case is transferred) may, in its discretion, either try the suit from the beginning or from the stage it was transferred.

7. If the Supreme Court, for any reason, finds that the application filed is frivolous or vexatious, then the court may impose a sum of not more than two thousand rupees to be paid by the applicant as compensation.

WritingLaw » Law Notes » Objection to Jurisdiction and Transfer of Suits

If you are a regular reader, please consider buying the Law PDFs and MCQ Tests. You will love them. You may also support us with any amount you like. Thank You.
2020-08-20