Offences Relating to Religion Under IPC 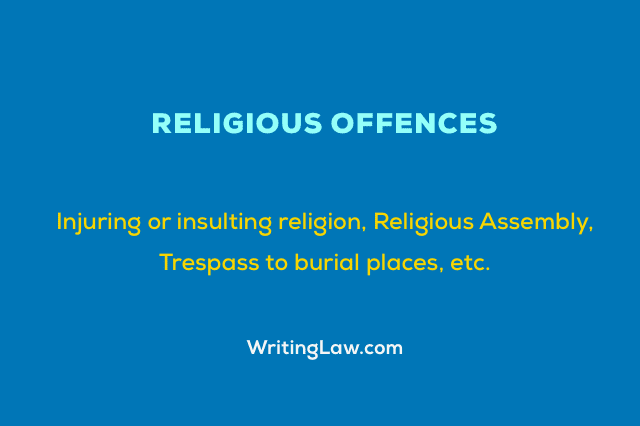 To understand religious offences, you may try to co-relate with the past incidents which took place in the country. Slaughtering of animals which have religious feelings associated with or destroying of idol deity to create religious hatred among groups and so on.

Nowadays, repeatedly in every law exam, either competitive or semester exams, questions from this area of law have started coming. Generally, sections are asked, or sometimes punishment is asked. It is, therefore, necessary to read them thoroughly.

Section 295 of the Indian Penal Code prescribes offence of injuring or defiling a place of worship to insult any religion. If any person destroys or causes damage to the religious place or any such place which is meant for worshipping or diminishes any object which is considered sacred by any religion like the holy books, idol, deity, Trishul, Kripan, and so on for insulting any religion, then such person shall be punished for imprisonment up to two years or fine or both.

Section 295A was inserted in the year 1927. If any person by words, either in writing or oral, or by signs, or by any visual representation, deliberately and maliciously insults or attempts to insult the religious beliefs or feelings of any class of citizens shall be punished for imprisonment up to three years or fine or both.

If any person with ill intention or maliciously disturbs any group or class of people gathered lawfully for religious purposes or religious ceremonies or for any religious activities, shall be punished for imprisonment up to a year or fine or both.

For example, there are generally gatherings for religious purposes like MahaKumbh, Char Dham Yatra, Muharram, Nagar Kirtans, Langar, etc. If any person tries to disturb any of such gatherings or assembly, he shall be punished under section 296 of the IPC.

If any person with malafide intention tries to wound or hurt religious feelings and knows that by his act, the other person’s feelings will be insulted, commits offence under section 297 of the IPC. He may do this by:

1. Trespassing any area or place of worship. For example, any temple, mosque, church, etc. or

2. Trespass any place which contains religious sculptures. or

3. Trespass any place set apart from the place where funeral rites are performed. or

4. Cause disturbance to a group of persons who have gathered to perform the last rites of a person.

If any person commits such offence, then he shall be punished for imprisonment for up to one year or fine or both.

If any person with an ill intention hurts the religious feelings of a person by:

1. Speaking or uttering any word in the hearing capacity of a person. or

2. Making any sound in order to hurt his religious feelings and faith. or

3. Making or representing any gesture in front of that person to wound his religious feelings. or

4. Placing any object in the surroundings of a person so as to make his religious feelings hurt.

Such a person shall be punished for imprisonment for up to one year or fine or both.

Religious offences are not merely offences described under the Indian Penal Code but are more than this. They tend to create chaos and disturbance in public areas.

In a country like India, where the state has no religion of its own, but the state regards all religions equally; Any messages, pictures, or other such material which are of such nature that, if spread, may cause disturbance to public order and morality must be avoided. Polarization in religions is not good for the country’s unity and integrity.

Read Next: Right to Freedom of Religion Under the Indian Constitution

If you are a regular reader, please consider buying the Law PDFs and MCQ Tests. You will love them. You may also support with any amount you like. Thank You.
2020-08-19